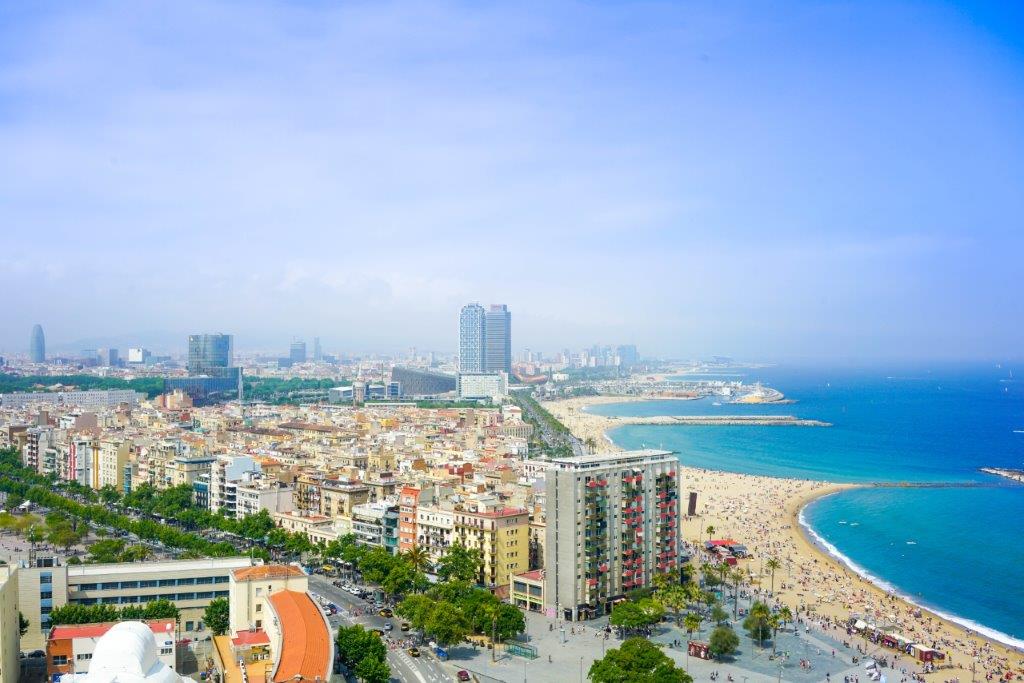 Barcelona is one of the largest cities in Spain. A city trip to Barcelona means enjoying everything this 2000 year old metropolis has to offer. Several sights in Barcelona are listed on the UNESCO World Heritage List. Discover the architectural attractions of Gaudi. Visit famous museums and impressive cathedrals and churches. Stroll through the authentic old centre. Shop in small shops and large department stores. Enjoy Spanish or international cuisine in one of the many restaurants. Go to a discotheque and immerse yourself in the exuberant nightlife.

Barcelona also has a nice bonus over other big cities. The city is located by the sea. From the center it is only a short walk to the sand. On the beaches of Barcelona you can relax. That makes Barcelona an ideal destination for a city trip of a day, a long weekend or a full week! According to Business Insider, Barcelona rose in 2017 to number 12 of the most visited cities in the world. In Europe, only London, Paris and Istanbul attract more tourists every year.

1. Barcelona: characteristics of the city

Do you want to go on a day, a long weekend or week or on a city trip to Barcelona? Do you want to know what there is to do in Barcelona? In this article we have listed the most popular sights and attractions of Barcelona for you. The characteristics of the Spanish city can be found in the table below. 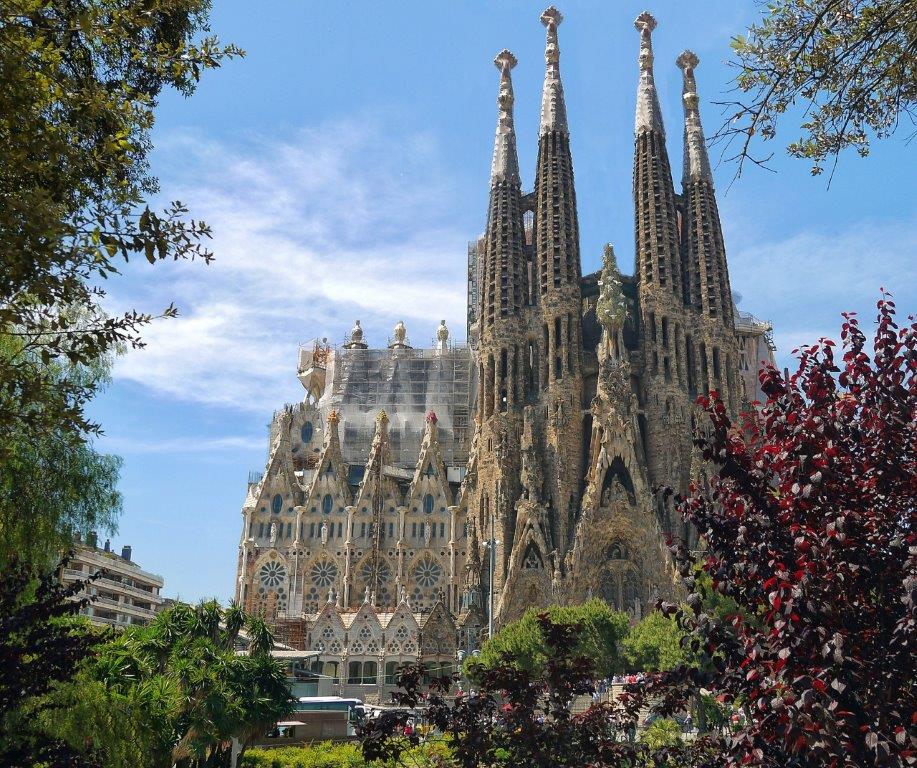 The beautiful Park Güell in the north of Barcelona is definitely worth a visit. The park was designed by the architect Gaudi. Originally it was intended that dozens of villas would be built in the park. Eventually they became 2 houses. One of those houses was Gaudi's home for 20 years. This house now forms the Gaudi Museum. The park is completely designed in a modernist style. Park Güell is large and there are all kinds of sights to find. Think of the colourful mosaic salamander at the entrance, the room 'Sala Hipóstila' with no less than 86 columns and the square with a special bench above the Sala Hipóstila. 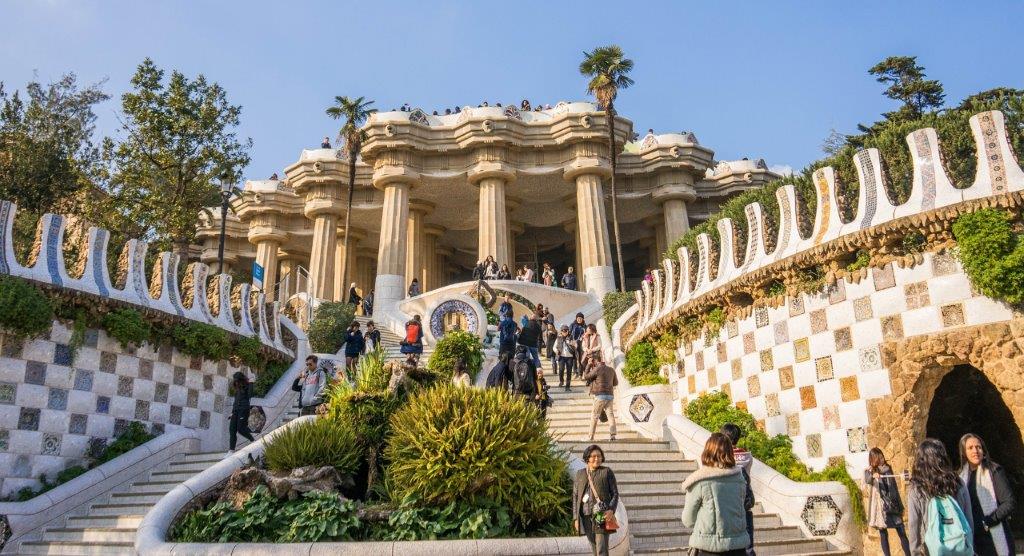 4. The famous promenade of Barcelona: Las Ramblas with La Boqueria

A must on Las Ramblas is the famous fresh market of the city: La Boqueria at La Rambla 91. You can enjoy excellent food here, both at the market and in the surrounding restaurants. There are products and dishes available from all over the world.

Some other tips at Las Ramblas are the beautiful Plaça Reial square, the cake shop Escribà, the monument of Columbus, and ice cream parlour Rocambolesc.

5. Plaça Catalunya, the heart of Barcelona

Central in the center of Barcelona you will find Plaça Catalunya. A large square where several large shopping streets start, like Las Ramblas. On both sides of the square you will find two covered shopping malls: El Corte Inglés and El Triangle. On the plaza there are a number of beautiful statues and two large fountains. On several benches you can relax between the flowers while shopping.

Around Plaça Catalunya you can easily grab a terrace. Drink a beer at the Hardrock Café or go for a good cup of coffee and breakfast at Café Zurich. In terms of the amount of pigeons, the square is no less impressive than Dam Square in Amsterdam.

The house Casa Batlló was designed by the famous architect Gaudi. The central theme is the story of the dragon slayer Saint George. The building has no right angle and is completely undulating. The facade is an eye-catcher thanks to the impressive mosaic work. The colourful roof terrace is one of the most popular parts of the building. Since 1969 Casa Batlló is a historical monument. Since 2005 it is on the world heritage list of UNESCO. Casa Batlló is open to the public. With an audio guide you will go on a voyage of discovery through this special house. 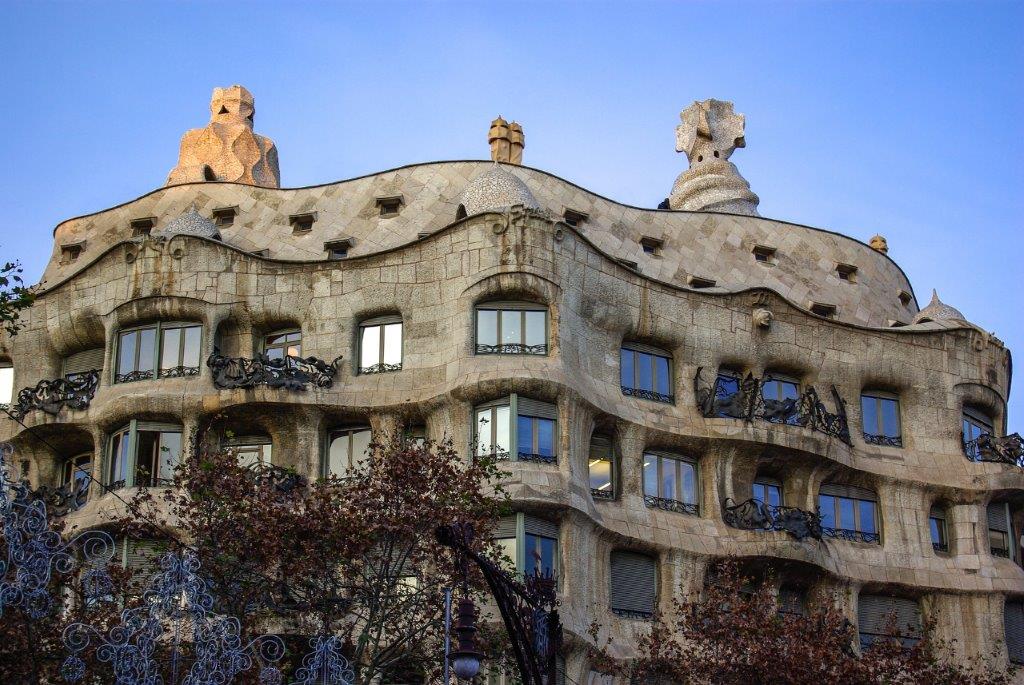 The football stadium Camp Nou is a nice sight in Barcelona. It is the home of football club FC. Barcelona. Camp Nou is the largest stadium in Europe and can accommodate almost a million spectators. It is even one of the three largest stadiums in the world! A must-see for the real football fans! You can buy a ticket for a soccer match, but even if it's not played, the soccer stadium is definitely worth a visit. Visit the club museum, have your name printed on the Barça shirt, walk through the players tunnel and see the field up close.

Montjuïc is a hill south of the centre of Barcelona. From here you can enjoy magnificent views over the city. The Parc de Montjuïc is a wonderful place to stay. Take a walk, picnic in the shade of the trees or visit one of the sights. Some of the sights in Montjuïc are:

In the Fundació Joan Miró Museum you can view works by known and unknown modern artists. There is a special space where young artists can present their works. The museum is named after the famous modern artist Joan Miró 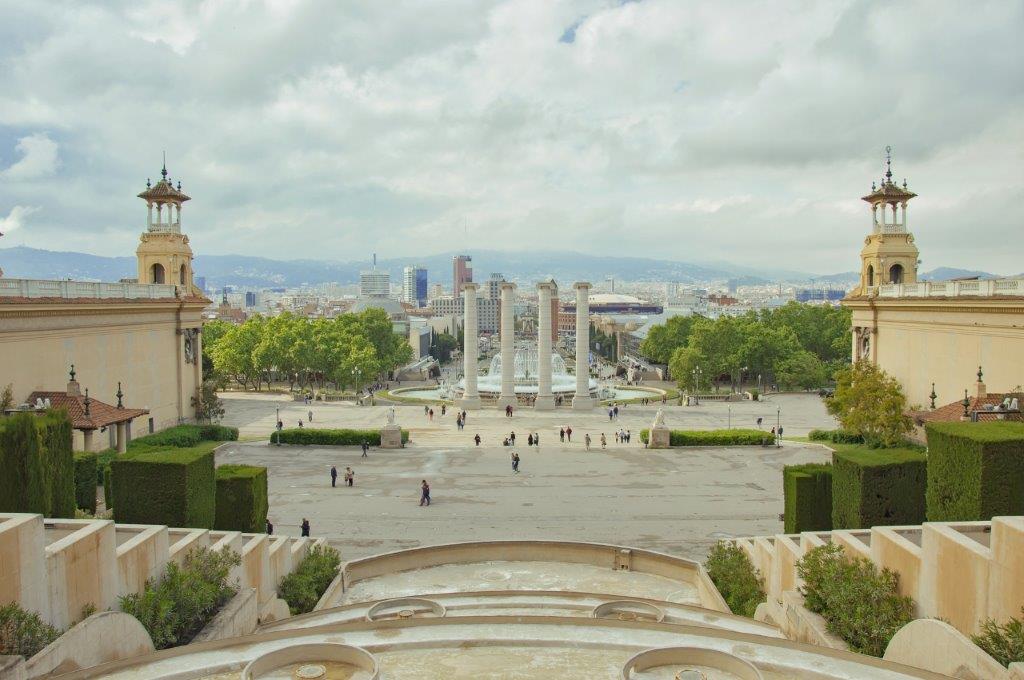 Not only in Paris you'll find an Arc de Triomf. Also in Barcelona you can admire the Arc de Triomf. This structure is inspired by the Parisian version. The brick arch was once the gateway to the World Exhibition in 1888. According to historians, the arch symbolizes the entrance to the modern twentieth century. The Arc de Triomf was designed by the architect José Vilaseca and restored shortly before the Summer Olympics. The arch is 30 meters high and richly decorated. The Arc de Triomf stands out beautifully against the blue sky and is a very photogenic building. You will find the Arc de Triomf of Barcelona to the north of the old centre. 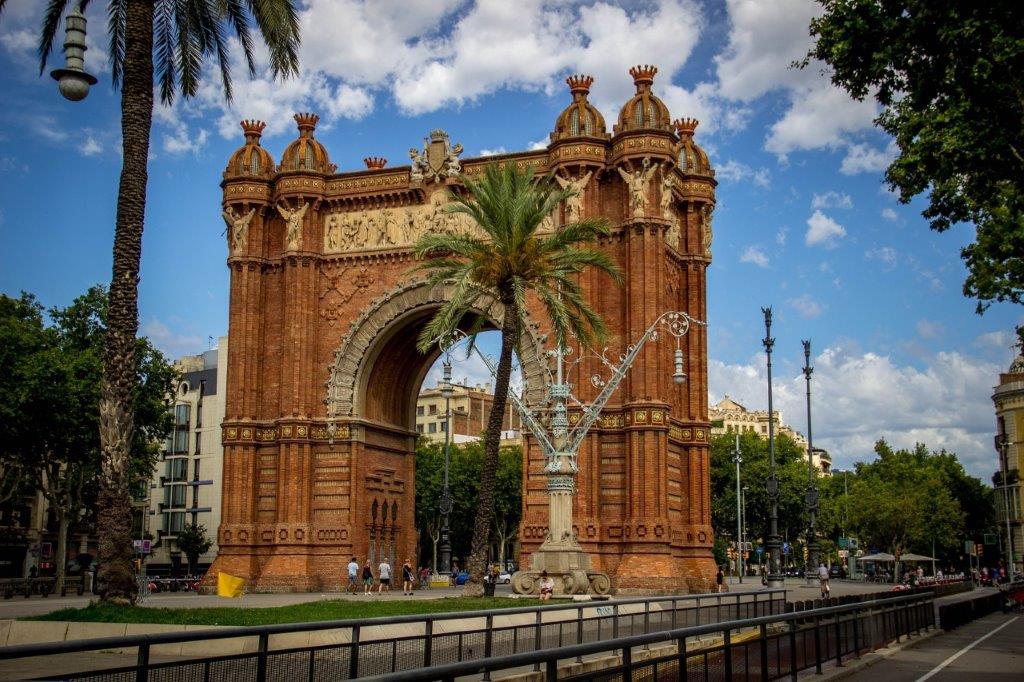 During a city trip to Barcelona you can't ignore the old city centre. And you don't want to, because a visit to Barri Gòtic is quite an experience. In this oldest part of Barcelona you will find all kinds of beautiful buildings. The gothic cathedral of Santa Eulalia, for example, is beautiful. The square Ramon Berenguer is also a famous attraction. Surrounded by Gothic buildings and you will find here a part of the old Roman city wall.

At the edge of the centre is the Palau la Musica Catalana. This is the concert hall of Barcelona. From the outside, the building is not so much special. The interior, on the other hand, is impressive. Wood carvings, statues, mosaics in the theme of nature with lots of flowers and leaves. This building is also listed on the UNESCO world heritage list.

The Tibidabo is a high hill on the outskirts of Barcelona. The hill guarantees beautiful views over both the city and the green surroundings. There is plenty to do in terms of recreation and sports. Walking, taking a nap under the trees, cycling, running. It is all possible. On Tibidabo you will also find a number of beautiful buildings, such as the church Iglesia del Sagrat Cor. On the mountain there is also a large amusement park: Parque de Atracciones del Tibidabo with a haunted house, merry-go-round, roller coaster, laughing mirrors, a Ferris wheel, bumper cars and many other attractions. Fun for a day of fun with the children. 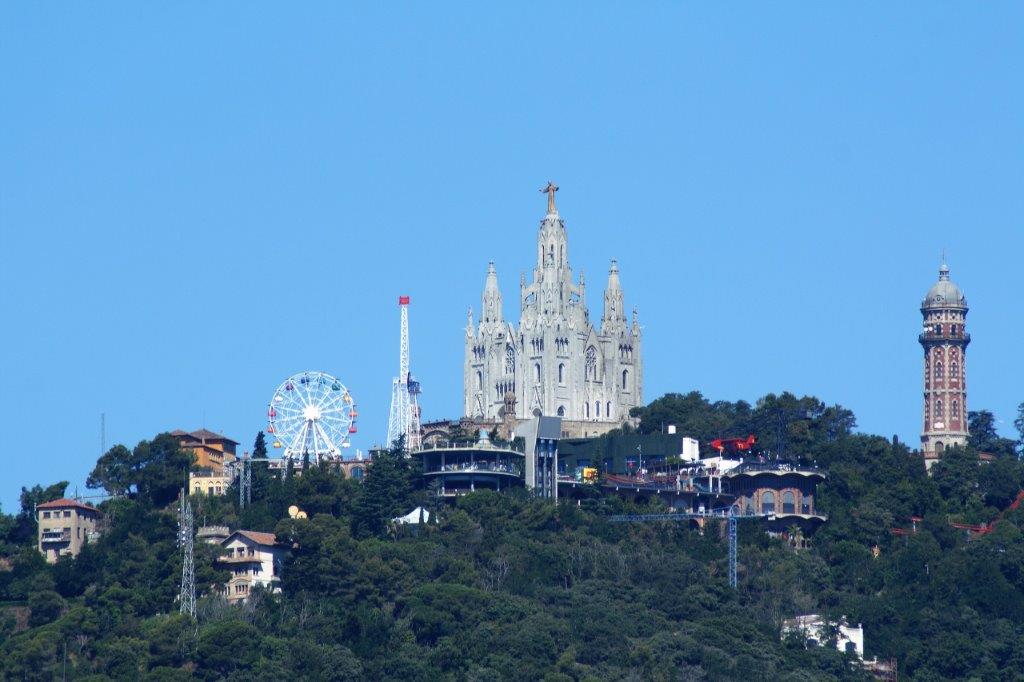 12. Barcelona: relax on the beach!

Enough culture sniffed out? What else is there to do in Barcelona? Enjoy the sun and sea on one of Barcelona's beaches! These are located on the east side of the city within walking distance of the center. The beaches are a favorite place to relax for locals and tourists alike, read a book or take a swim in the surf. Enjoy lunch or dinner in one of the many restaurants or stroll along the boulevard. It is all possible on and along the beaches of Barcelona. The most famous beach is Playa San Sebastian.

All beaches have a total length of 4.5 kilometers. According to National Geographic they are among the most beautiful beaches in the world. All facilities are available: showers, lockers, public toilets, playgrounds, volleyball courts, free wifi. You can also rent sunbeds and parasols.

Barcelona has plenty to offer when it comes to culinary matters. Simple food stalls on the sidewalk, surprising pop-up restaurants, food-truck events, cozy family restaurants and chic starred restaurants with professional chefs. Enjoying good food for a long time at the table, that's what Spain is all about. The choice of restaurants is very large and the prices vary from very cheap to very expensive. Go pinchos eat at a bar in the Problesc area, enjoy paella in one of the restaurants along the beach or go for a luxury dinner at the 2-star restaurant Abac.

It will not surprise you that Barcelona is an excellent shopping destination. Design clothes, bags, shoes, souvenirs, food. You can get everything in Barcelona. Shop till you drop in the many department stores and shops. The popular shopping street Avenida Portal de l'Angel is with about 3.500 visitors per hour the busiest shopping street of Spain.

Barcelona has a vibrant nightlife. There are a lot of possibilities to go out in the city. Go for a drink in a cosy pub, visit a concert or flamenco performance, look for a trendy cocktail bar or immerse yourself in the party atmosphere in a discotheque. In Barcelona there is plenty to do day and night.

14. Stay in a hotel in Barcelona

In Barcelona you can spend the night in different accommodations. For a short city trip a hotel in Barcelona is of course the perfect accommodation. Comfortable and you get from the hotel as the center of Barcelona is. There are hotels in all price ranges. From simple to five stars. Of course you can also choose for a cheap guesthouse, a bed & breakfast or a campsite outside the city. Each accommodation has its own price tag. In general, the more luxurious, the more expensive. You often pay more if you want to stay in a hotel in the centre of Barcelona or at the beach. 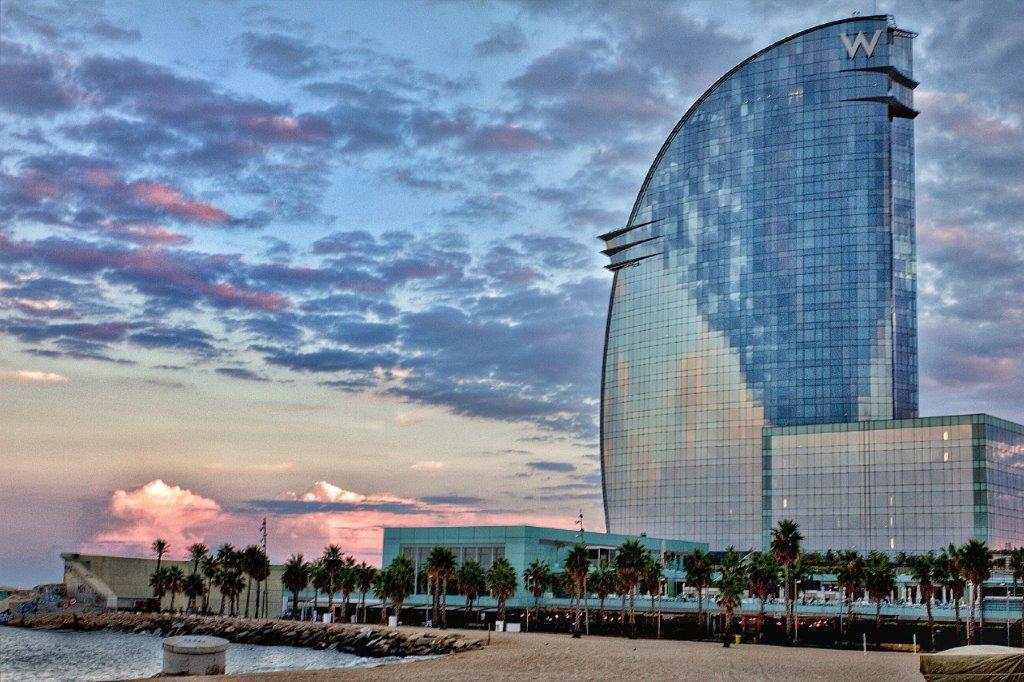 15. Barcelona: how to get to this Spanish city?

On a city trip to Barcelona? Then the airplane is the preferred means of transport. From various Dutch airports you can fly to Barcelona in an hour or two. Barcelona International Airport is about 12 kilometers from the city. By train or bus you can easily get to the city centre. Cheap airlines often fly to Girona-Costa Brava Airport or Reus Airport. From both airports you're about an hour on the way to Barcelona.

You can also take the train or car to Barcelona. The distance from Utrecht to Barcelona is over 1500 kilometers. The travel time by train or car is about 16 hours. Once arrived in Barcelona you can travel by metro, bus or leg car. It is also possible to rent a bike.

Below we share with you some tips, tricks and trivia for when you go on a city trip to Barcelona.