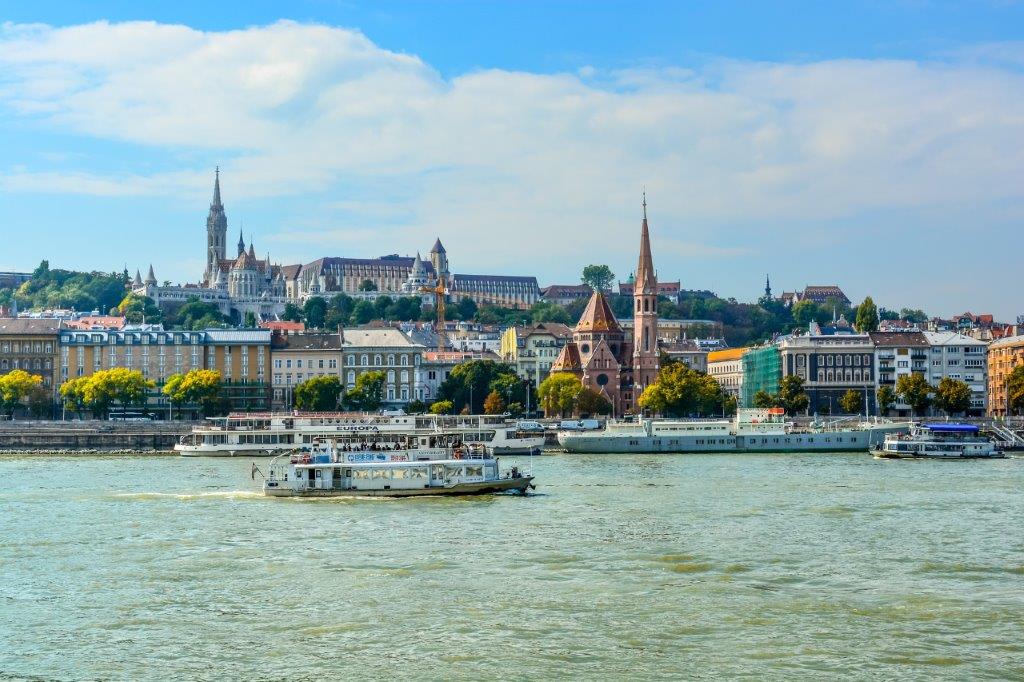 Budapest is the capital of Hungary and also the largest city of the country. It is also the cultural heart of Central Europe. The name Budapest refers to the two city districts separated by the Danube: Plague and Buda. The Buda district is located on the west bank and is known for its beautiful castles and viewpoints. Buda is hilly and full of history. The district Pest is located on the east bank of the river. Pest is the modern shopping and business centre of the city.

Budapest has many sights, some of which are even listed on the UNESCO World Heritage List. For example, the water tower on Margaret Island and the impressive Citadel of Budapest. In addition, there are beautiful museums, several special historic buildings and more than enough opportunities for shopping. Budapest is traditionally known as the city of spas. A visit to such a health resort is therefore a must if you go on a city trip to Budapest. The capital of Hungary is very atmospheric and has many restaurants, cafes and nightlife venues. In short, Budapest is a popular destination for a city trip for a day, weekend or full week.

1. Budapest: characteristics of the city

Do you want to go on a city trip to Budapest for a day, weekend or week? Do you want to know what there is to do in Budapest? The characteristics of the city can be found in the table below. In this article we have listed the most popular sights of Budapest for you.

2. The Parliament Building of Budapest

One of the most famous sights of Budapest is the Parliament building. Located on the Danube, it is the place where important guests and heads of state are received. The House of Representatives of Hungary also sits here on a regular basis. Some impressive rooms of the Parliament building are the National Meeting Room, the Dome Room and the large Congress Room. The building has almost 700 rooms and is beautifully decorated. Worth a visit! 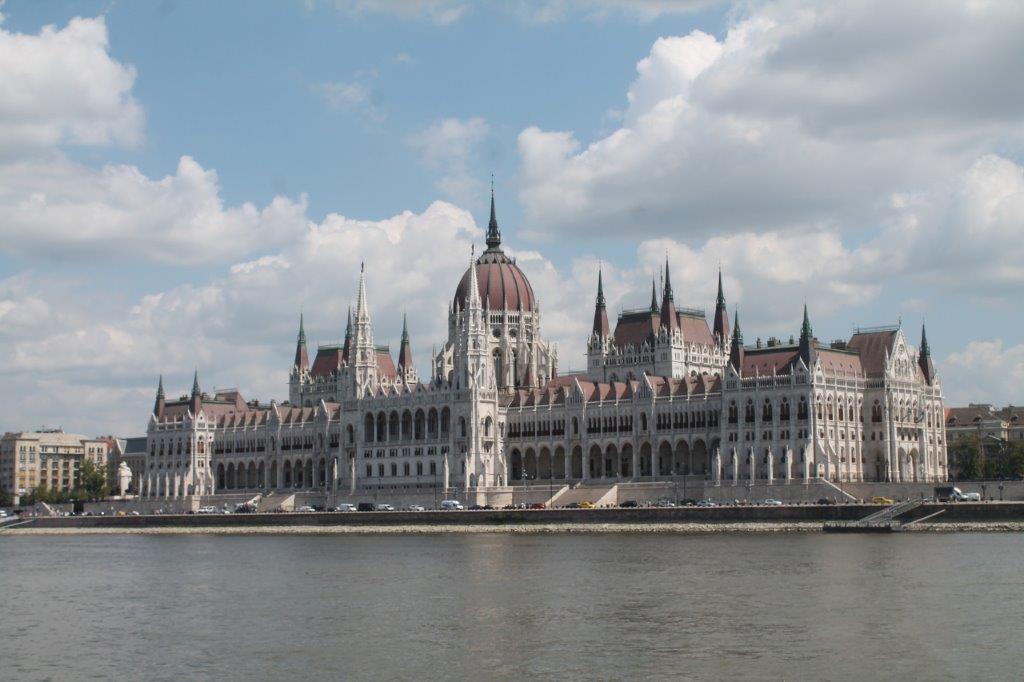 Budapest's Heroes' Square was established around 1900. It is surrounded by the Museum of Fine Arts and the Kunsthal. In the middle of the square stands the 45 meter high Millennium Monument with Archangel Gabriel on the middle pillar. Behind the square is the city park. At the bottom of the pillar you will find the seven tribesmen who led the Magyar tribes to Hungary. At the top of the colonnades on either side of the pillar are kings and other important historical figures from Hungary. 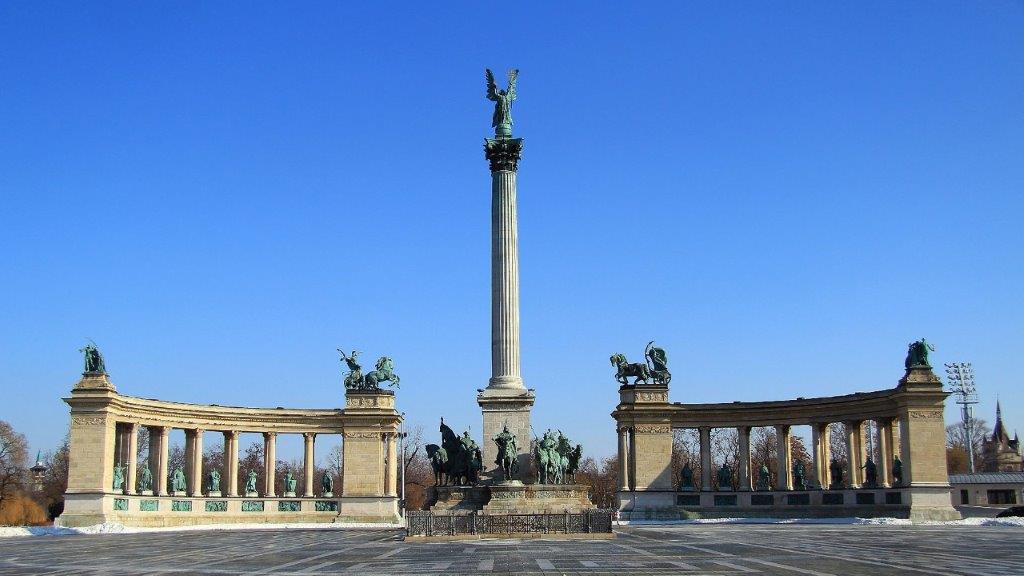 There are several statues and monuments along the Danube promenade. One well-known monument is 'Shoes on the banks of the Danube' to commemorate the Jewish victims of the war.

During a city trip to Budapest, a visit to the special museums of the city should not be missed. A very special museum is the House of Terror (Terror Háza Múzeum). Here you can learn about the horrors of the fascist dictatorship during WWII and the communist dictatorship after the war. The outside of the building already makes an impression. Inside you will find an exhibition and you can visit the torture chambers and prison. Not the most cheerful outing, but very instructive and impressive.

Invisible Exhibition Budapest. Here you will travel in total darkness. You will be guided by a blind or visually impaired guide into a world of sounds, smells and touches. Tip: choose for an Invisible Diner and eat, drink, dance and sing in the dark.

There is a luxury spa on the island, a special music fountain, a petting zoo and in the summer you can enjoy a movie in the open air. The Art Nouveau water tower on the island is also worth a visit. This is about 100 years old and is on the UNESCO World Heritage List. 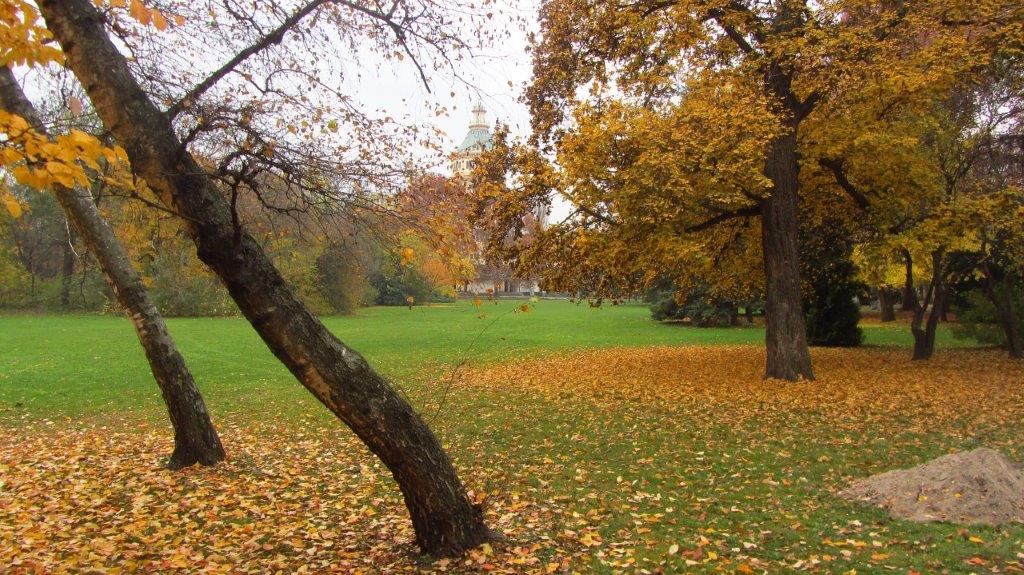 The Hungarian Opera also belongs on the list of must-see sights in Budapest. It was built in the neo-Renaissance style with lots of marble and frescoes. Budapest's opera house is one of the best opera houses in the world when it comes to acoustics. The large auditorium has room for over 1,200 people.

One of the symbols of Budapest is the Saint Stephen's Basilica. This is the largest church of Budapest with space for no less than 8000 people. The neo-Renaissance style is beautiful with frescoes, engravings and different kinds of marble. The church is named after the first prince of the country: King Stephan. From the dome you have a beautiful view over Budapest. 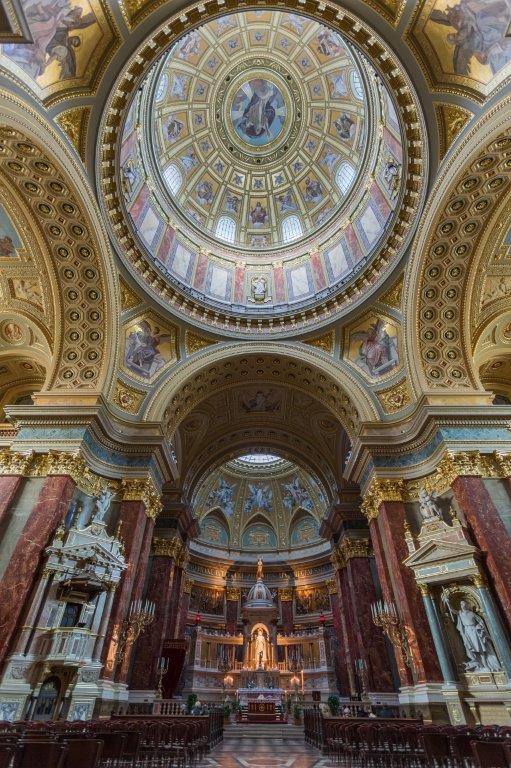 Dohany Street Synagogue includes a Jewish museum, the Hero Temple and a Jewish cemetery. In the Holocaust Memorial Park behind the synagogue is a weeping willow statue in memory of the victims and heroes of the war.

7. Dive into the history of Hungary in the Buda Castle District

The Buda castle was once the royal palace of the Hungarian kings. It is beautifully situated on the Danube and the view from the castle is magnificent. Nowadays the building is used as a museum. You will find the Hungarian National Gallery, the National Széchényi Library and the Historical Museum of Budapest. Close to Buda Castle is the Fisherman's Bastion, another beautiful building in Budapest. It is a complex with natural stone walls, stairs, towers and arcades. The watchtowers guarantee the most beautiful panoramic views of the city. 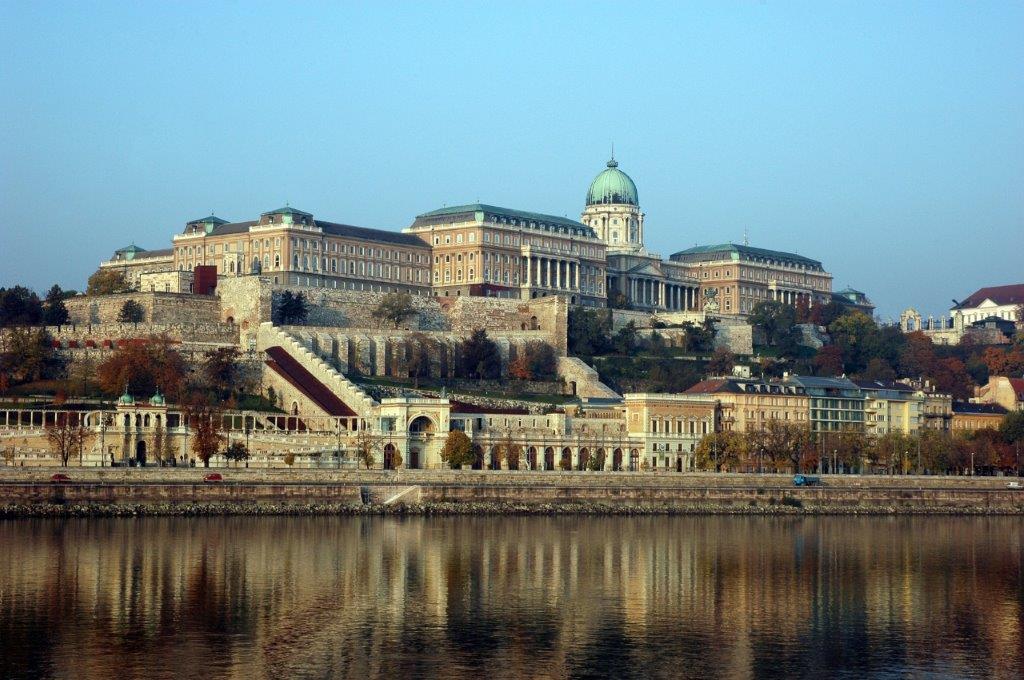 In the Buda Castle District you will also find the Faust Wine Cellars. These underground wine cellars are located under the remains of a 13th century Dominican monastery. The cellar is part of an extensive labyrinth system under the castle hill. This labyrinth system served as an escape route during the Middle Ages. In the Faust Wine Cellars you can enjoy the most beautiful wines of Hungary in a medieval atmosphere. A guide will tell you all about this alcoholic drink.

8. Memento Park & the Citadel of Budapest

Memento Park is very special. The park is a large outdoor museum with 42 statues that stood in the city during the communist era. The most important attraction is the 8 meter high bronze statue of Stalin. There are also various exhibitions in the sculpture park about life in Hungary and Budapest during the Cold War. 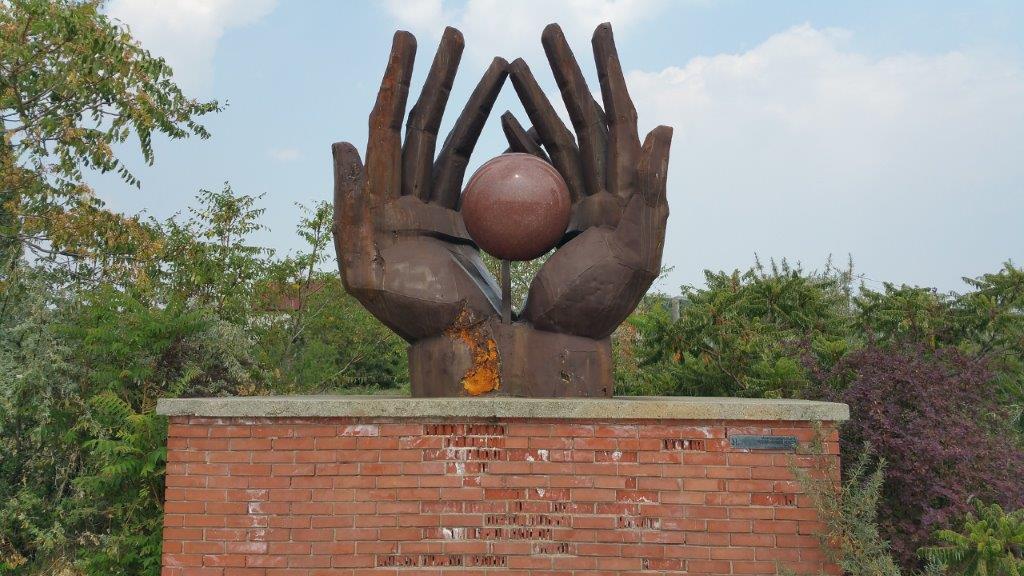 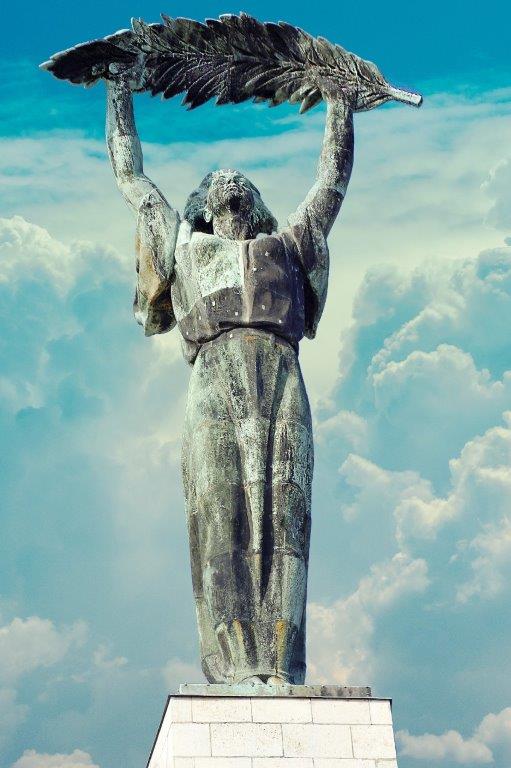 9. Shopping during your city trip to Budapest

Budapest is not a huge city, but you can do great shopping there. You'll find shops of international brands, luxury fashion boutiques, vintage boutiques as well as many other shops. Andrassy Boulevard is the place to be for designer brands like Gucci and Louis Vuitton. In the nearby streets Vörösmarty tér and Váci utca you can find well-known chains like H&M and Zara. There are also several shopping malls, such as WestEnd City Center, Aréna Plaza and Corvin Plaza.

In addition to the normal shops and shopping centres, it is also worth visiting the Central Market Hall. There are dozens of stalls here where you can buy everything. Linen, souvenirs, Hungarian dolls and much more. You can also go here for food and fast food. A popular place for locals as well as tourists. 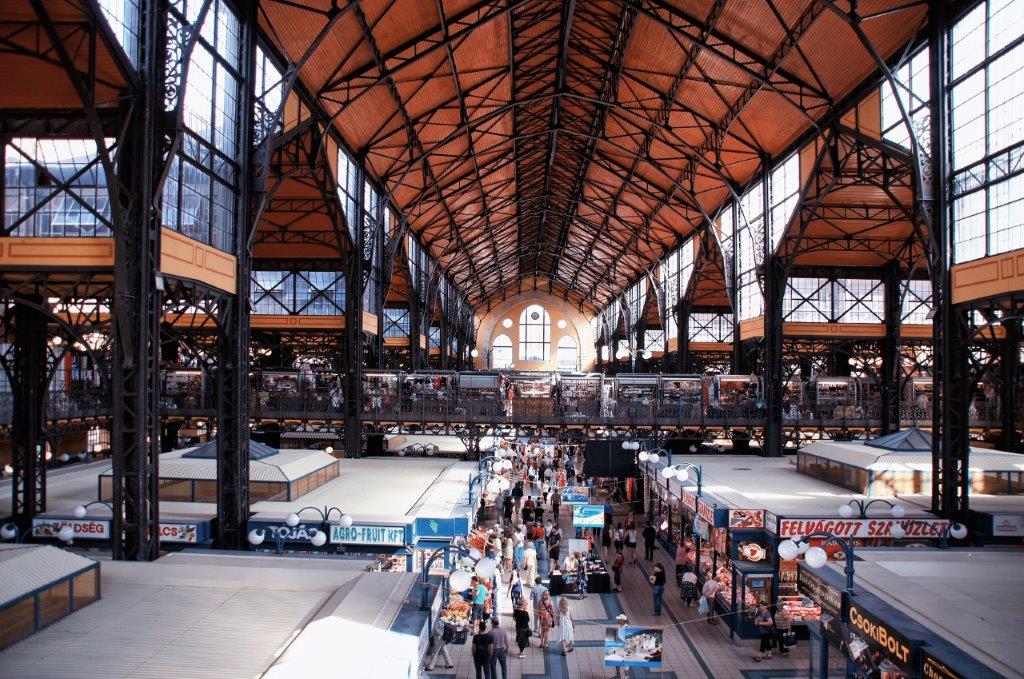 If you like bargains, one of the largest flea markets in Europe is highly recommended. The Ecseri flea market on the south side of the city is a nice outing. At the market you can buy everything. Furniture, clocks, statues, paintings, clothes and much more. And all that for dump prices. There are also all kinds of food and drink stalls. The Ecseri flea market is open daily at 8.00 am. The earlier you come, the more on offer. On Saturdays the market even starts at 6.00 a.m. and there are also separate stands on that day. Another popular flea market in Budapest is Zichy Mihály in the city park.

10. Resting and partying in a Hungarian spa

Relax optimally and visit one of the beautiful spas of Budapest. An absolute must is Gellért Baths. Enjoy thermal baths, swimming pools, the Art-Nouveau architectural style, the view over the Danube and a drink and snack on the terrace. The spa is popular with locals and tourists alike. Another beautiful spa are the Széchenyibaden. This is the largest medicinal spa in Europe and over 100 years old. The baths are fed by natural springs. There are no less than 18 swimming pools and whirlpools, several saunas, a gym and several terraces to have a drink or something to eat.

You can also book all kinds of treatments in both spas. The massages are kindly priced. There are also regular special parties held in the spas. If you like a special party, then you really should visit a pool party.

11. Eating, going out and staying overnight in a hotel in Budapest

Budapest is not only a beautiful city, but you can also enjoy good and cheap food. Start in a cozy breakfast shop, have lunch in a nice lunch or dine in a cozy restaurant. Most menus feature both local and international dishes. Try the local specialties such as kürtoskalács, goulash soup, langos and chicken paprikash.

Budapest offers all kinds of entertainment venues. Going out in this Hungarian city is cozy and inexpensive. There are several pubs, karaoke bars, hip ruin clubs, upper class skybar parties, beer gardens, underground house parties and of course the pool parties at the spas. 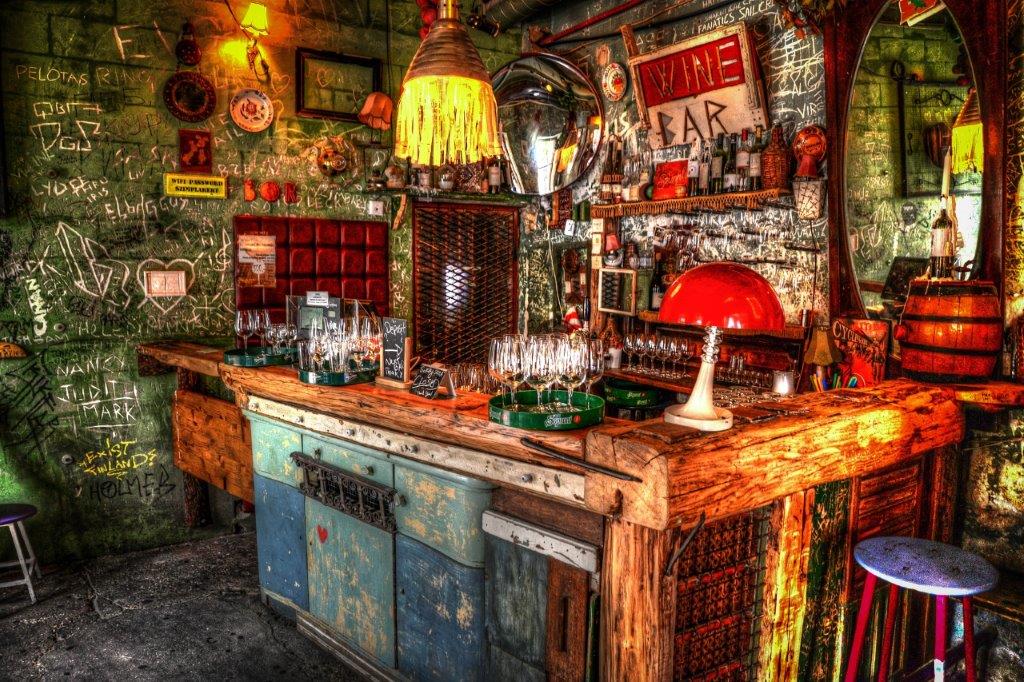 Spend the night in Budapest in a hotel. You can choose a cheap hostel or a luxury hotel with multiple stars in Budapest. Most hotels are located in atmospheric old buildings. Prices vary from 10 euros per night for a hostel to 100 euros for a luxury hotel. If you go on a city trip to Budapest, you don't necessarily have to stay in a hotel. You can also choose for a charming B&B or a campsite. Haller Camping is for example at an excellent distance from the centre.

On a city trip to Budapest? For a city trip of a day or long weekend in Budapest, the airplane is the preferred means of transport. From various Dutch airports you will fly to the Hungarian capital in about two hours. The airport of Budapest, Ferihegy International Airport, is located 12 kilometres from the city centre. From the airport you can quickly reach the heart of the city by bus or shuttle.

A trip by car from the Netherlands to Budapest is possible, but you are on the road for a while. Over the distance of more than 1,300 kilometres you'll take at least 14 hours. By train you'll soon be about 18 hours away. You can also book a bus trip to Budapest with a bus company. Once you arrive in Budapest, you can travel by tram, metro or train. There are also several cable cars, rack and pinion trains and chairlifts. The city centre is compact, so you can do a lot of walking or rent a bike. 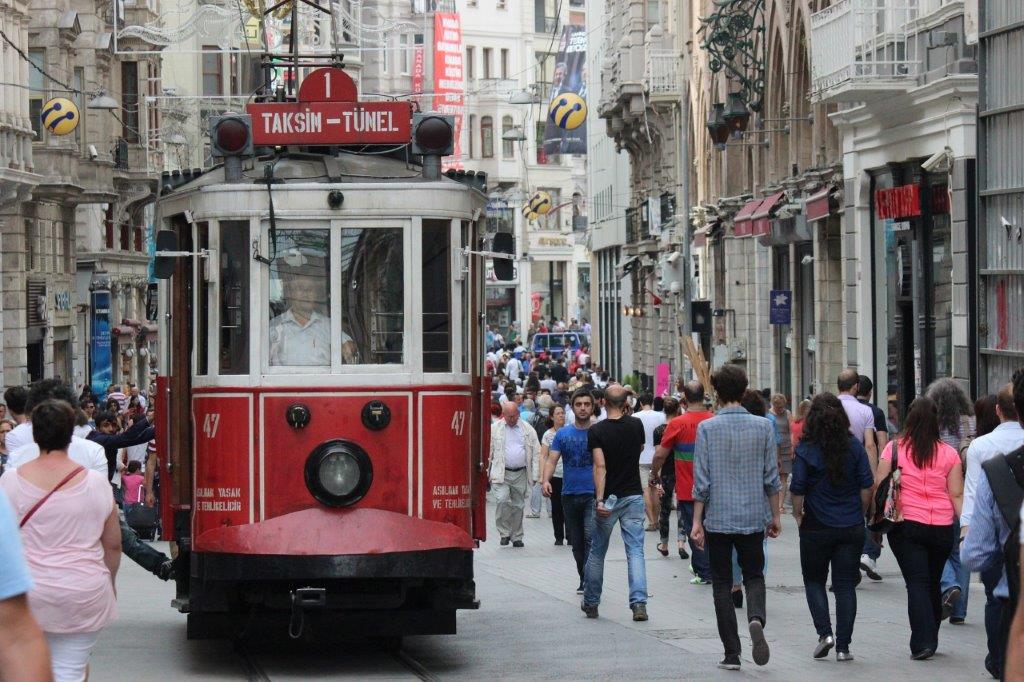 13. Some tips for you when you go to Budapest for a day, weekend or full week