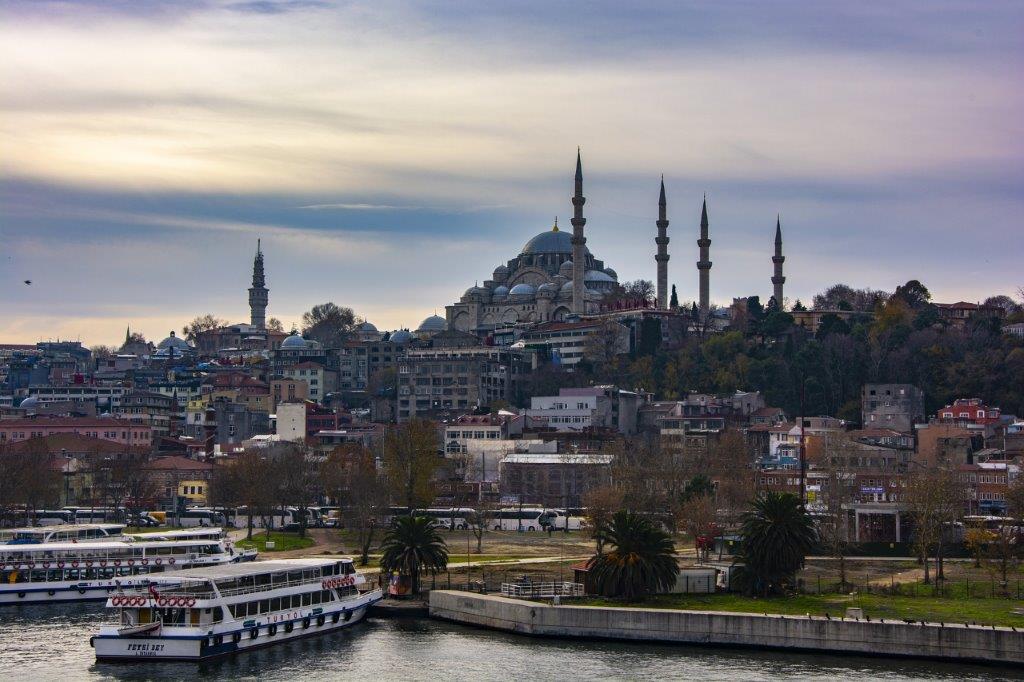 Istanbul is a large coastal town in Turkey and is one of the 10 most visited cities in the world. In the past Istanbul was known as Constantinople and formed the capital of the Ottoman Empire. It is the city of sultans and mosques. In Istanbul you can find various sights such as the world famous Hagia Sophia and the unique underground water system Basilica Cistern. Besides the sights Istanbul has a nice atmosphere. In the city you can do excellent shopping, discover Turkish cuisine and go out.

1. Istanbul: characteristics of the city

Do you want to go on a city trip to Istanbul for a day, weekend or week? The characteristics of this big city in Turkey can be found in the table below. What is there to do in Istanbul? In this article we have listed the most famous and popular sights of Istanbul for you.

Istanbul is the city of mosques. There are many mosques to be found that are well worth a visit. The most famous mosques are:

The Hagia Sophia is Istanbul's largest mosque and was originally built as a church. When Constantinople came into the hands of the Turks in 1453, the church was transformed into a mosque. Nowadays the building is used as a museum. The Hagia Sophia is built in Byzantine style and is a UNESCO World Heritage Site. The mosque has a huge dome with no less than 40 windows and there are four high minarets. Inside you will find various mosaics, a prayer niche and a sultans lodge. 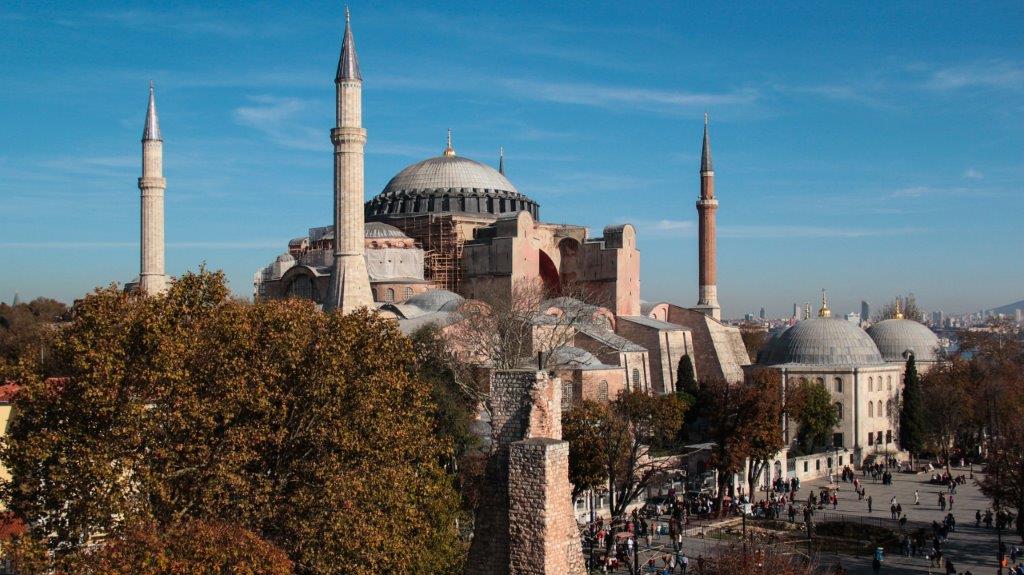 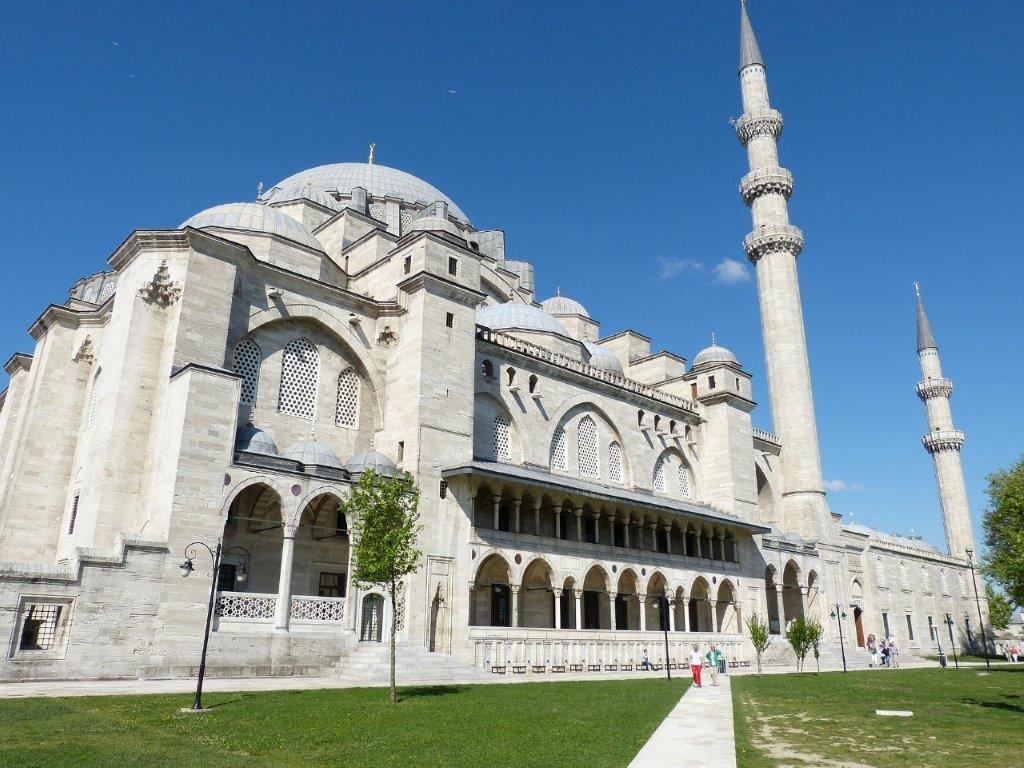 One building that should not be missing from this list is the Blue Mosque or the Mosque of Sultan Ahmet. The Islamic church was built to surpass the grandeur of the then Christian Orthodox Hagia Sophia. The mosque has a large dome, several small domes and six minarets. The Blue Mosque owes its name to the 20,000 tiles with blue as the most important colour. The tiles can be found in the interior of the mosque. 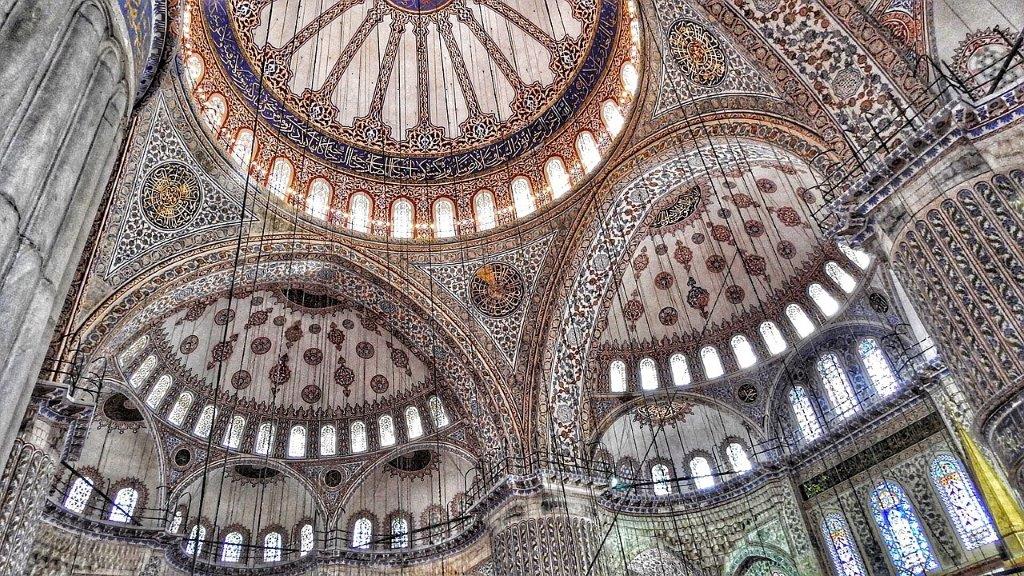 3. Topkapi palace and the Archaeological Museum of Istanbul

Also the Topkapi Palace is one of Istanbul's most impressive sights. The palace is situated on top of a hill on a small peninsula. Once the building served as the administrative center of the Ottoman Empire. Topkapi means 'gate of the guns' and refers to the large guns that stand outside the gates. The Topkapi palace is one of the largest palace complexes in the world. Since its construction around 1450, each sultan added new parts to the palace. The complex is therefore a maze of buildings, courtyards and gates.

Different parts of the palace can be visited. Discover the courtyards, the harem, the palace kitchen, the Sofa mosque or take a look at the treasury and wardrobe of the sultans. From the balconies you have a beautiful view over the city and the water.

At the Topkapi Palace you will also find the Archeological Museum of Istanbul. Here the history of Istanbul comes to life in the form of all kinds of historical artefacts from different civilisations. The museum consists of three buildings: the Archaeological Museum, the Museum of the Old Middle East and the Tile Pavilion.

4. An impressive attraction in Istanbul: The Dolmabahce Palace

The Dolmabahce Palace is another impressive building in Istanbul. Dolmabahce succeeded Topkapi as the administrative centre of the Ottoman Empire. Dolmabahce is a lot more modern, luxurious and western than Topkapi Palace. The palace complex is situated on the Bosphorus and has an enormous size. There are no less than 285 rooms, 46 halls, 6 bathrooms and 68 toilets. The Dolmabahce Palace is a mix of all kinds of architectural styles: baroque, rococo, modern Ottoman, neoclassical. The interior exudes luxury. A real eye-catcher is the largest chandelier in the world with a weight of 4.5 tons. The founder of the Turkish republic, Atatürk, lived and died in the palace. 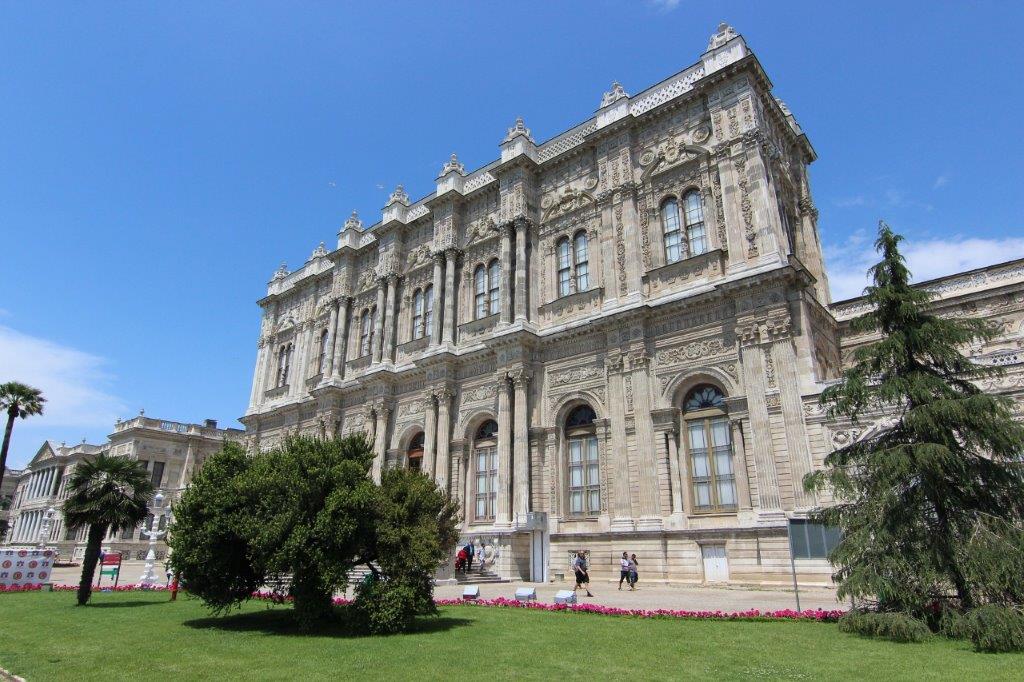 The Basilica Cistern is one of Istanbul's most special attractions. This is an underground water storage system from the sixth century. 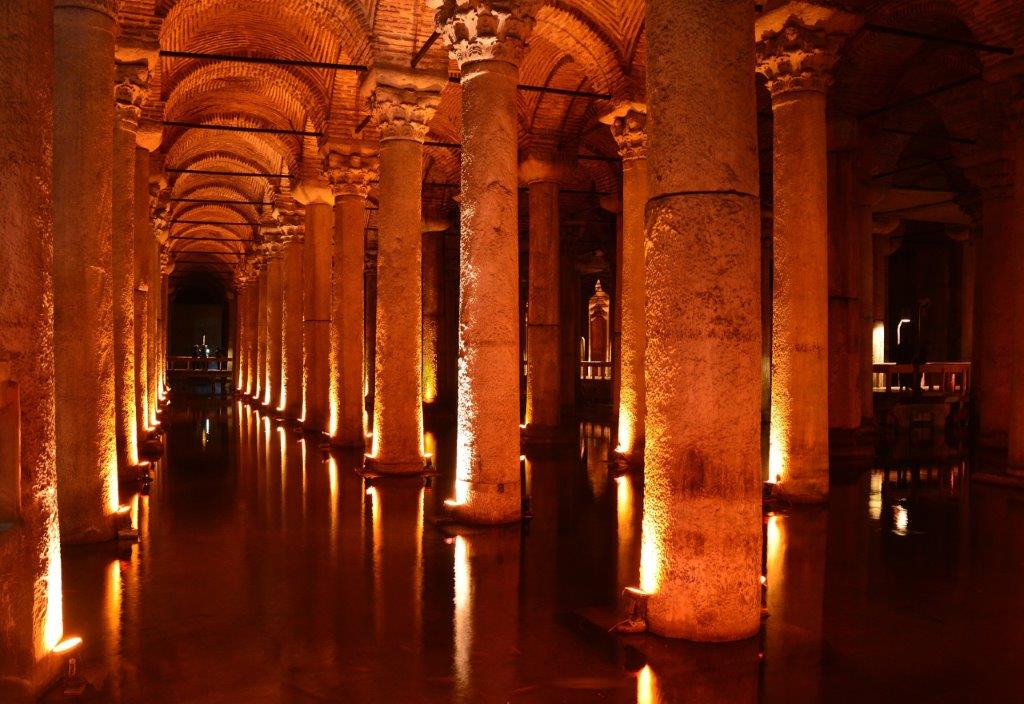 6. Enjoy the cosiness of the Grand Bazaar and the Egyptian Bazaar

The Grand Bazaar (Capali Carsi) is a popular indoor market in Istanbul. It is the largest covered market in the world. The Bazaar has around 3,000 to 4,000 shops, 61 streets and welcomes an average of 300,000 visitors per day. In short, a place with lots of people and lots of stuff. The Grand Bazaar is popular among locals as well as tourists. It is very cozy and you can shop there very well.

Another well-known covered market is the Egyptian Bazaar. This is one of the oldest bazaars in the city and is known as a spice market. For herbs, spices, dried fruit, tea and soap you are in the right place here. You can also buy clothes, souvenirs and jewelry.

In the European part of Istanbul you will find the historical Galatatoren. The tower is 61 meters high and at the top there is a restaurant. From the top you have a beautiful view over the city. 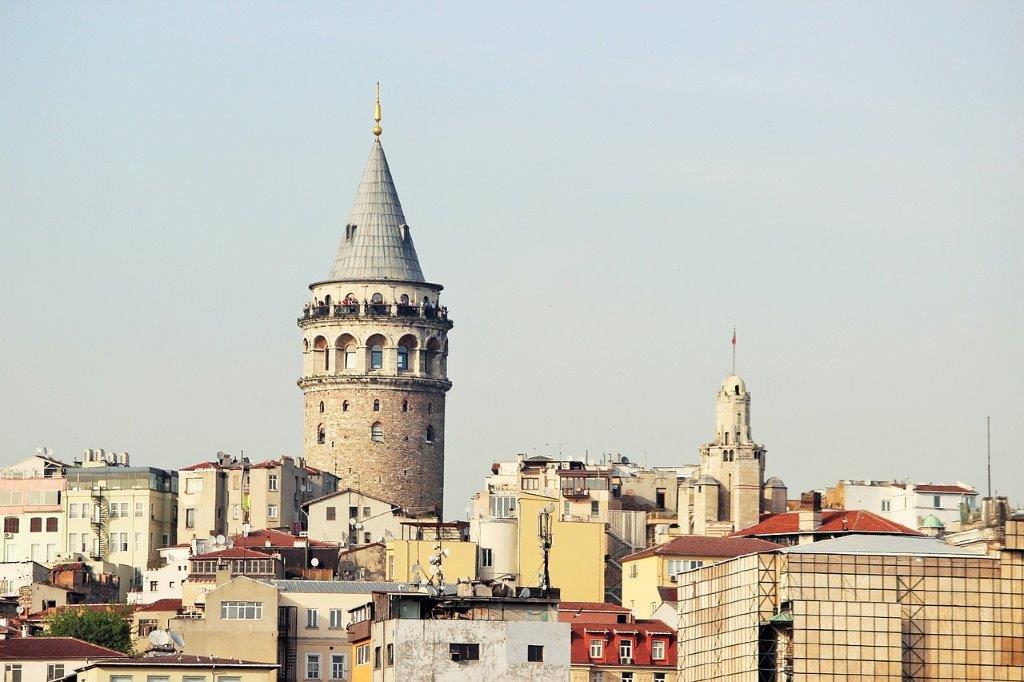 The old city is connected to the European part of Istanbul by means of the Galata bridge. This bridge is full of fishermen and all kinds of stalls. It is very busy, but very atmospheric. From the bridge you have a beautiful view over the old city and the water.

Bebek is one of the most luxurious districts of Istanbul and is situated on the Bosporus. It has a lively atmosphere and has many cafes, restaurants and shops along the deep and wide bay. It is a district for the rich and you will find several luxury houses, summer houses and palaces.

Ortaköy is another popular and lively district of Istanbul. This district is also located on the Bosphorus, under the Bosphorus bridge. Ortaköy is known as an entertainment centre and has a large number of cafes, restaurants, shops and nightclubs. In Ortaköy you will find a number of historic buildings:

In the weekend there are street markets in Ortaköy where you can go for all kinds of fun stuff. 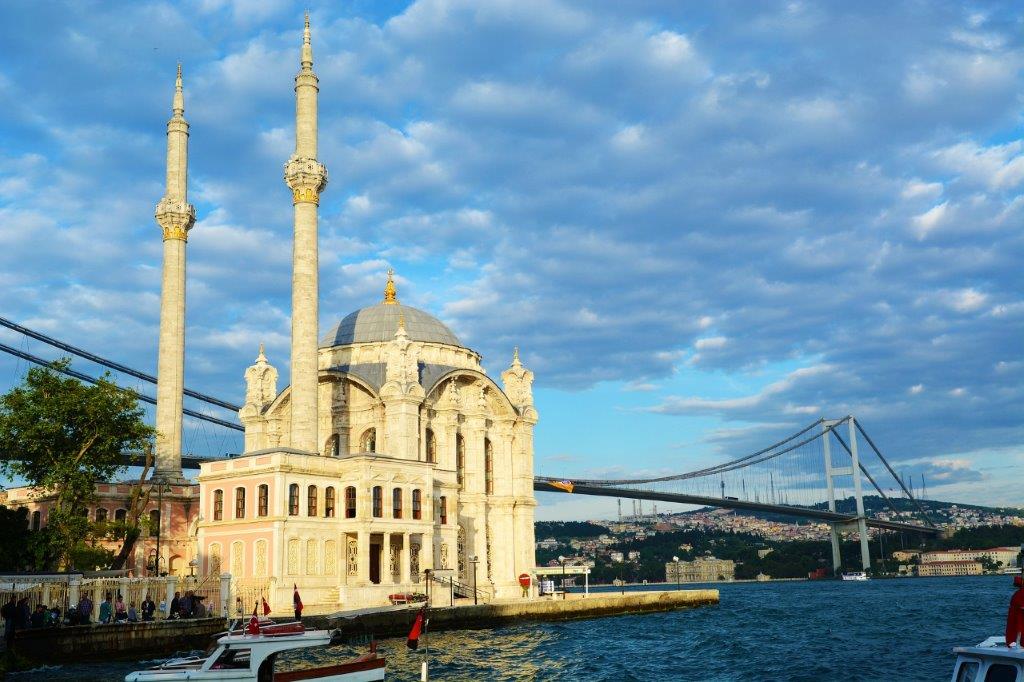 Istiklal Avenue is Istanbul's most famous street and should not be missed if you go on a city trip to this city. The street is 3 kilometers long and has many shops, restaurants, cafes, and nightclubs. There are many street artists and there is a historic tram. Istiklal Avenue runs along the famous Taksim Square. Recommended on Istiklal Avenue are: the Flower Passage, French Street, Galatasaray fish market, Galatasaray Hammam, St. Anthony of Padua Church and the Pera Museum.

During a city trip you can also explore Istanbul by boat. You book a cruise on the Bosphorus. There are several tours possible on which you will sail along various sights of Istanbul. For example, you can choose a sunset cruise where you enjoy Istanbul at night. Or book a cruise including luxury lunch. On some tours you can also get off the boat and visit certain buildings from the inside.

In Istanbul you can enjoy Turkish cuisine. There are various eateries: from simple food stalls to luxury restaurants. The food is generally quite cheap. Some specialties are:

Don't forget to visit one of Istanbul's tea or coffee houses during your city trip. Tea is the national drink of Turkey. Tea drinking is a serious business and you should do it in a special teahouse. Many coffee houses have a very lively atmosphere. There are several coffee houses where artists provide entertainment. 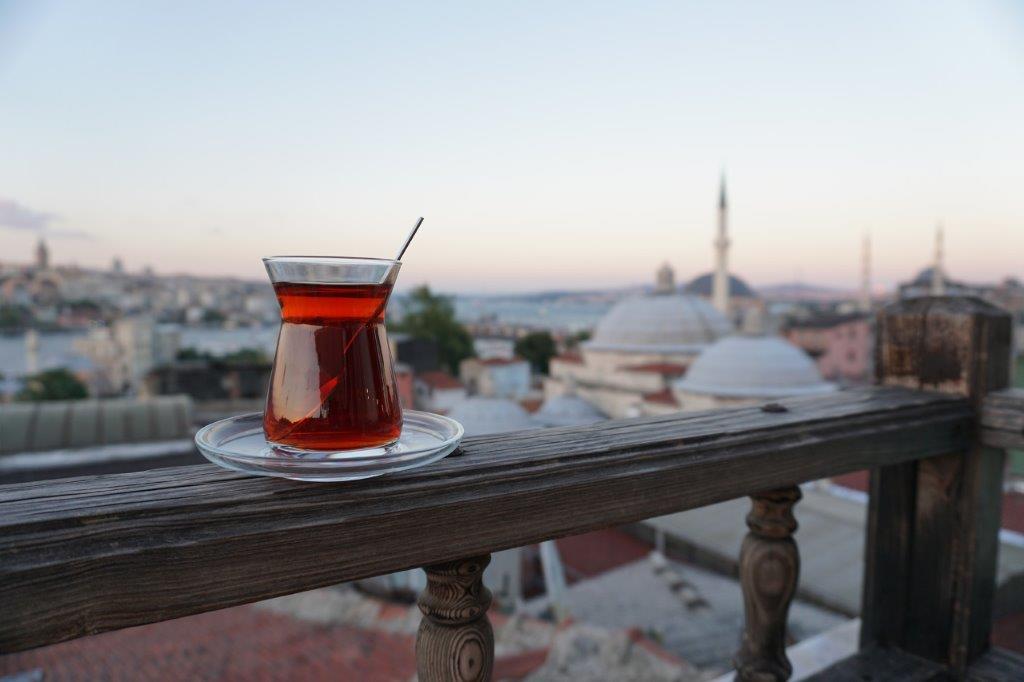 If you want to do some serious shopping during a city trip, you can indulge yourself in Istanbul. There are all kinds of shopping streets with both small boutiques and large department stores. Sometime in June the Istanbul Shopping Fest takes place. For three weeks the city is all about bargain hunting and tax-free shopping. Famous places to shop in Istanbul are Istiklal Avenue, the districts of Galata and Nisantasi, the Grand Bazaar, Zorlu Centre, Istinye Park and Addresistanbul.

In Istanbul you can go out very well. The real nightlife centre is Istiklal Avenue near Beyoğlu. Ortaköy is also known as a popular nightlife area. There is a choice of cafes, discotheques and nightclubs. In the evening you can also visit a coffee house, beer hall (birhane) or wine bar (saraphane). There are regular events organized in the city. Famous festivals include the International Festival of Music and the International Jazz Festival of Istanbul.

12. Accommodation in Istanbul: from camping to luxury hotel

Spend the night in Istanbul in a hotel. You can choose a simple and cheap hotel, but also a luxurious and somewhat more expensive hotel in Istanbul. A room in a hotel in Istanbul can be booked from about 25 euros per night. A hostel or B&B is of course also a great option. And on a half hour drive from Istanbul is Camping Mocamp.

On a city trip to Istanbul? For a city trip of a day, long weekend or week Istanbul the airplane is the preferred means of transport. From several Dutch airports you fly in less than 4 hours to this big city in Turkey. The major airports near Istanbul are Sabiha Gökçen and the Atatürk airport. Sabiha Gökçen is about 60 kilometers from Istanbul. If you're lucky you'll be in the center in just over an hour. The Atatürk airport is a lot closer. By subway it takes 20 to 30 minutes to get to the centre.

Below are some tips if you are going on a city trip to Istanbul.

Istanbul is a historic city with many special attractions. In addition, Istanbul has a nice atmosphere. Stroll through the charming streets, go extensive shopping in large department stores and small boutiques, browse around a bazaar, enjoy Turkish cuisine or discover the nightlife in one of the cafes and clubs that Istanbul has to offer. In short, Istanbul is a great destination for an unforgettable city trip for a day, weekend or full week!