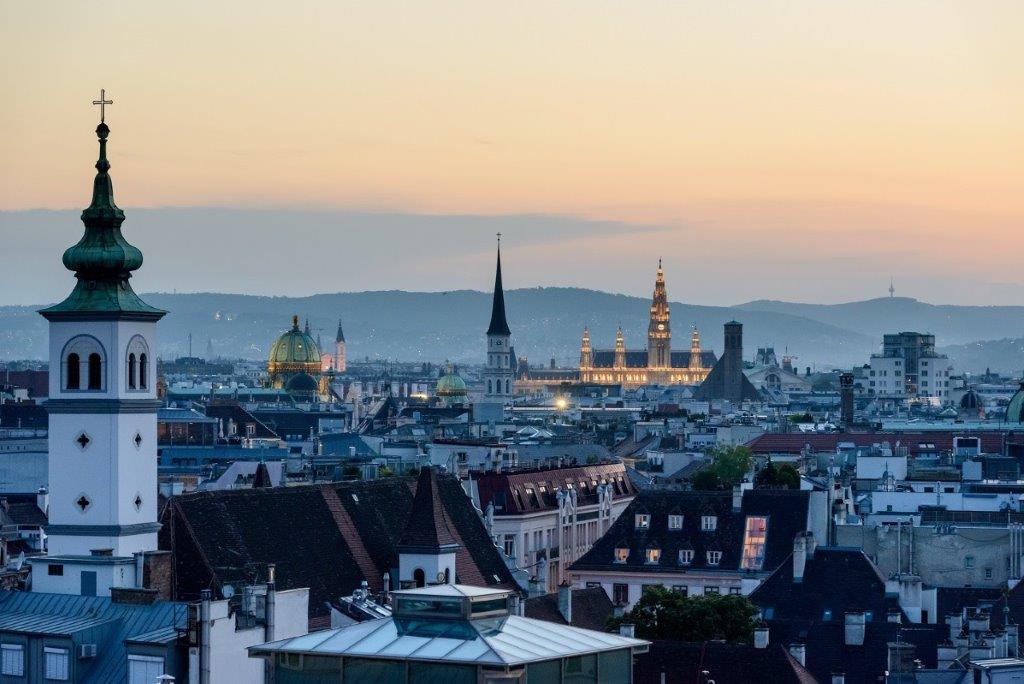 Vienna is the capital of Austria and is full of beautiful historic buildings. Think for example of the Belvedere palaces, Hofburg and Schloss Schönbrunn. The history of Vienna begins in the year 15 BC. The special old town is listed on the World Heritage List of UNESCO. Vienna used to be the central city within the Habsburg Empire. Sissi, Austria's most famous empress, lived in the Hofburg. Of all the cities in Austria, Vienna is still by far the largest and attracts the most tourists.

In Vienna you will find many places of interest. In addition, it is a city with a lot of atmosphere. This is partly due to the beautiful buildings in baroque style, the cozy restaurants and cafes and the horse-drawn carriages you encounter in the city. The city is also an excellent place for shopping, good food and nightlife. In short, a beautiful city for a city trip!

Do you want to go on a city trip to Vienna for a day, weekend or week? Do you want to know what there is to do in Vienna? The characteristics of the capital of Austria can be found in the table below. In this article we have listed the most famous and popular sights of Vienna for you.

During a city trip to Vienna you really should visit Schloss Schönbrunn. This former summer house of the imperial family is one of the most beautiful baroque locks in Europe. Take a look at the many state and private rooms with beautiful furniture and works of art. The large gallery is one of the highlights of the castle. All kinds of festivities and ceremonies used to take place here. You can explore the castle on your own or join a guided tour.

Round around the castle is a large park where you can go for a lovely walk. In the park you will also find the oldest zoo in the world: Schönbrunn Zoo. The zoo was proclaimed the most beautiful zoo in Europe in both 2009 and 2010. More than 500 animal species walk, swim and fly around here.

Schönbrunn Schloss, together with the park and the zoo, is on the UNESCO World Heritage List

The Stephansdom (St. Stephen's Cathedral) is one of the most beautiful buildings in Vienna. The cathedral has four towers. The highest tower is over 136 metres high. You can climb the towers to enjoy the view over the city at the top. Vienna lies at your feet. St. Stephen's Cathedral is because of its Gothic architecture very impressive and an important symbol of Vienna. Inside you will find beautiful stained glass windows, chandeliers, paintings, statues and various art treasures. You can book a guided tour or explore the church on your own. 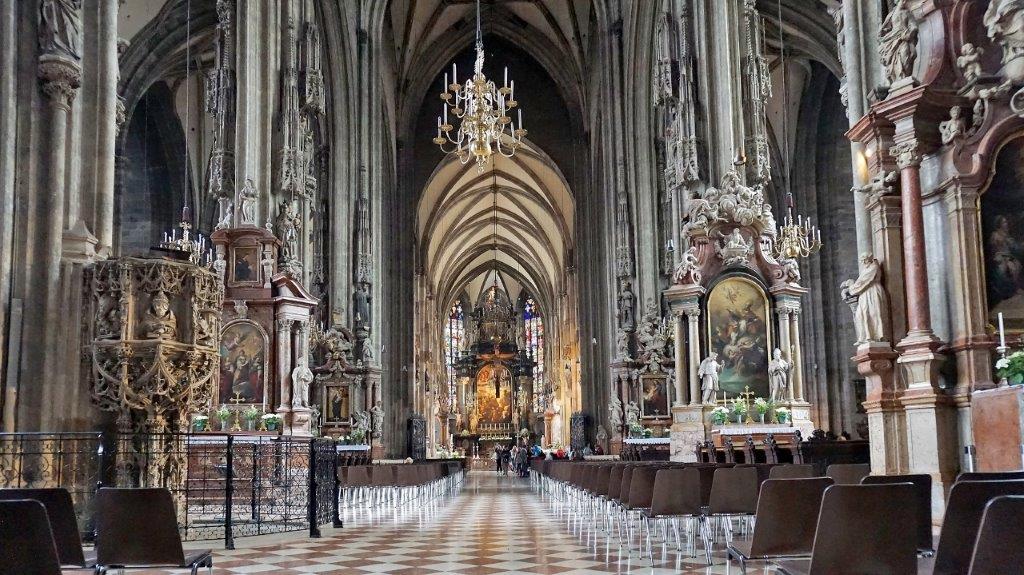 The Karlskirche is an impressive Roman Catholic church in Baroque style. Striking are the two large columns next to the entrance and the 74 meter high dome. In the church you will find beautiful ceiling paintings, reliefs and altarpieces. You can take a glass elevator up into the dome to see the ceiling paintings.

During a city trip to Vienna you can also visit the Kapuzinergruft. This is the imperial crypt under the Kapuzinerkirche on the Neuer Markt. Hapsburgs have been buried here since 1633. In the crypt you will find the graceful sarcophagi and urns of various Hapsburgs. A special experience.

4. The palace of Sissi: The Hofburg

The Hofburg is an imperial palace in the centre of Vienna. Until the beginning of the 20th century it was a residence of the imperial family. In the Imperial Apartments you will find the living quarters of Emperor Franz Joseph I and Empress Elisabeth, or Sissi. There is also a special Sissi museum where you can find out everything about this famous empress of Austria. 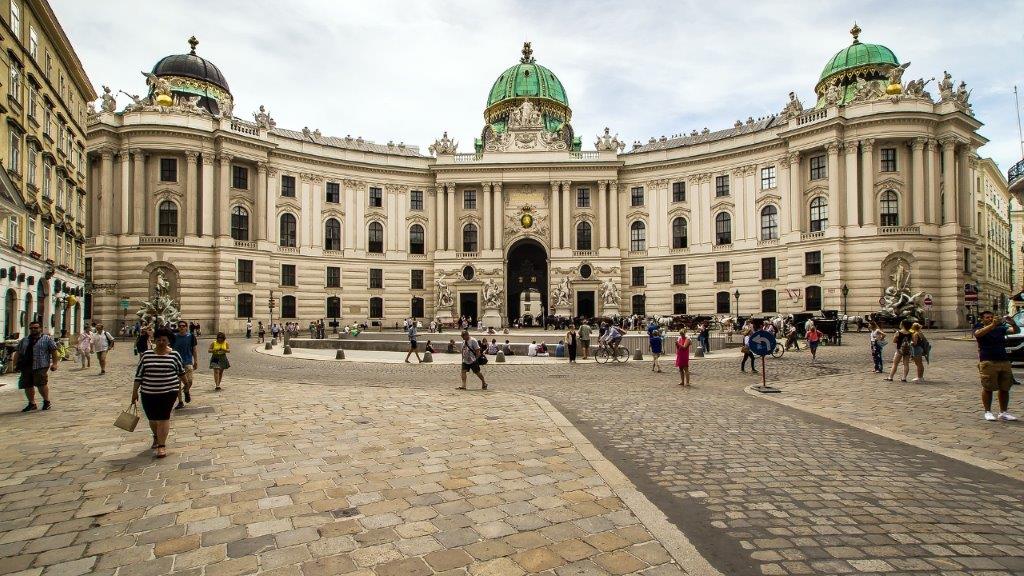 Other places of interest in the palace complex are the Treasure House with a collection of crown jewels and the National library with beautiful baroque show room. The Spanish driving school is also impressive. Here the famous Spanish horses are trained. During special gala performances you can admire the equestrian arts.

In a part of the building the current president of Austria lives and works. The chapel of the palace is home to the Wiener Sängerknaben on Sundays. This is a choir with boys (and nowadays also girls) who follow a professional musical education.

The museum is named after the Duke Albert Casimir of Saxe-Teschen. In Albertina you can see works by artists such as Da Vinci, Michelangelo, Raphael, Rubens Rembrandt, Dürer, Cézanne and Klimt. There are also regular temporary exhibitions, for which art is borrowed from museums all over the world.

It was opened in 1891 and has a large collection of European paintings. The museum is mainly home to painters from the 15th to 18th centuries such as Titian, Veronese, Tintoretto, Canaletto, Durer, Velazquez, Rubens, Van Dyck and Brueghel the Elder.

The Naturhistorisches Museum of Vienna was founded by Emperor Franz I before the Viennese Court. The museum contains more than 30 million collectibles from nature. Famous are, for example, the large dinosaur skeletons, the moving Velociraptor, the 25,000-year-old manatee and the largest and oldest meteorite collection in the world. 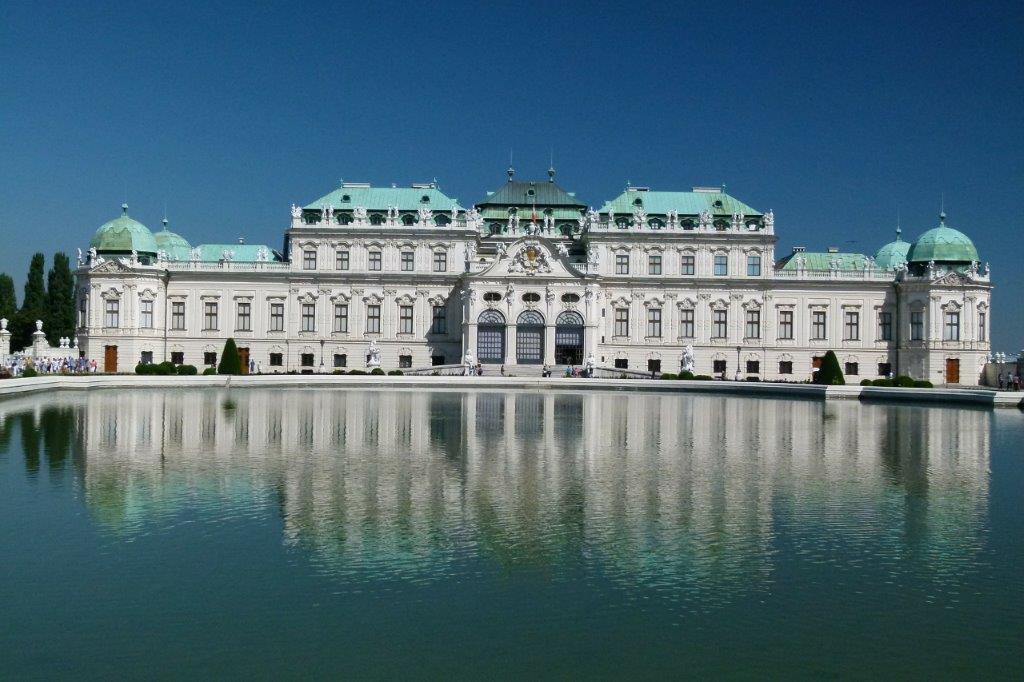 One of Vienna's most special sights is Castle Belvedere. This complex consists of two palaces: Untere Belvedère and the larger Obere Belvedère. The palaces were designed by the architect Lucas von Hildebrandt and built around 1720 in the Baroque style

In addition to the aforementioned sights in Vienna, there are of course many more. The Donauturm (Donautoren), for example, is well worth a visit. This tower on the Danube is the tallest building in Austria with 252 meters. The Donauturm will be completely renovated in 2018. A special viewing platform is located at 150 metres. At a height of 170 meters you will find a rotating restaurant and coffee house with local specialties. The view from the top of the city and the river is magnificent.

Another attraction in Vienna is the Wiener Riesenrad, or the Vienna Ferris wheel. At 65 metres high, it is one of the city's landmarks. From the top you have a beautiful view over the city. The Wiener Riesenrad was built in 1897 in honour of the birthday of Emperor Franz Joseph.

The Ferris wheel has played a role in several Hollywood films, such as 'The Third Man' and 'The Living Daylights'. The Wiener Riesenrad has therefore been on the list of treasures of European film culture since 2016. You can book a gondola for a romantic dinner or a reception, for example. The Ferris wheel is located in the amusement park Wurstelprater. 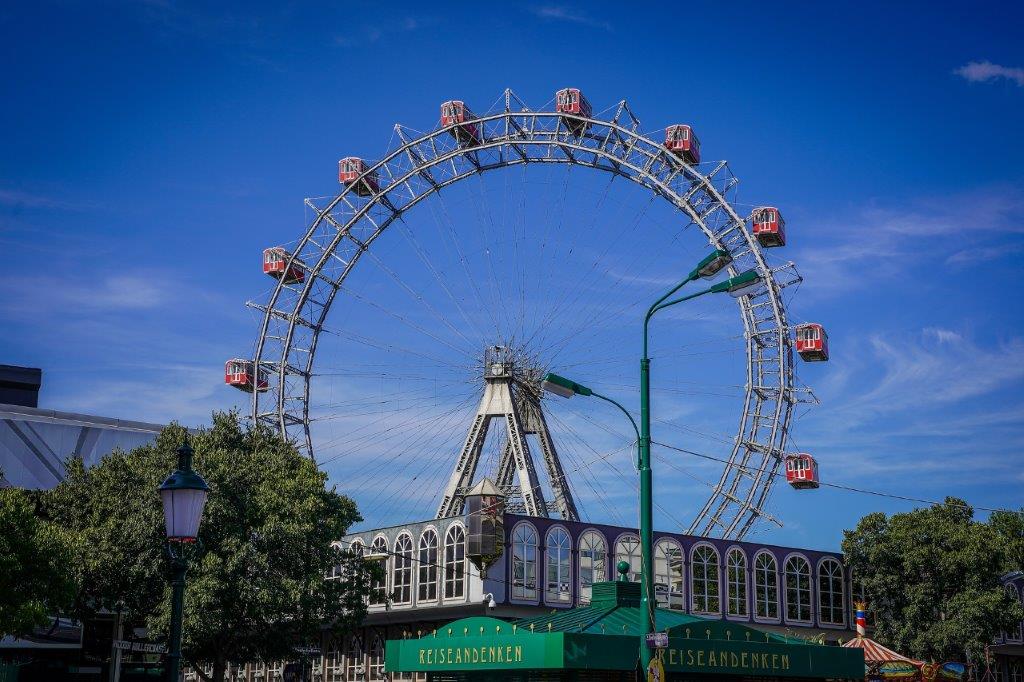 The Haus des Meeres is a tropical house in the centre of Vienna and is housed in a historic tower. Here you can see the many fish in the aquarium as well as various birds, snakes, lizards, crocodiles, monkeys, insects and other animals. The sharks and large sea turtle are impressive.

8. What else is there to do in Vienna: shopping, eating & nightlife

In Vienna you can eat well. There is something for every budget. For example, order a quick and cheap bite at one of the kiosks on the street. And luxurious lunches on the terrace or dining in chic surroundings are also excellent in Vienna. Traditional Austrian dishes that you can order in Vienna include soup with chips, goulash, trout, Kaiserschmarren, apple strudel and of course Wiener Schnitzel. Of course, most restaurants also offer international dishes on the menu. 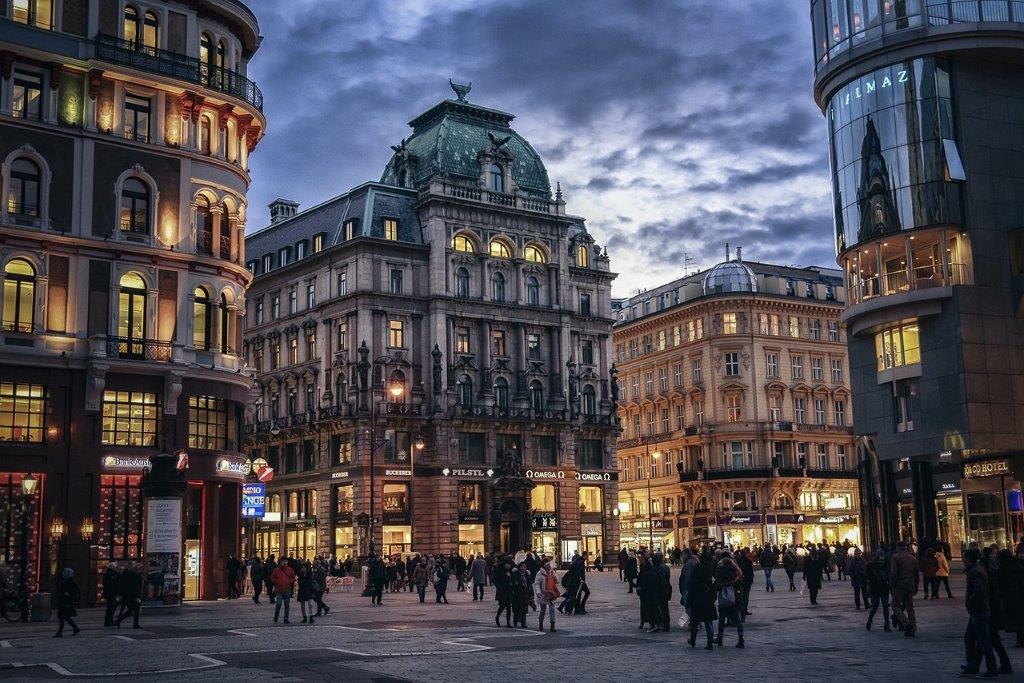 The evenings and nights of Vienna are lively. Lovers of classical music can visit an opera or instrumental concert, for example. For the real partygoers, there is also plenty to do in the many nightlife areas with pubs, dance bars and discotheques. Famous is for example discotheque Flex on the Danube.

Vienna receives many tourists every year. The city has a large number of hotels. A hotel in Vienna is not cheap. You quickly lose 100 euros per night. In the high season from April to October, you often pay a little more for a hotel in Vienna than during the rest of the year. Of course there are cheaper options. During a city trip to Vienna you can share a room in a hostel, book a cozy bed & breakfast or stay in a tent on the campsite if the weather is nice outside.

Compare different travel providers and accommodations at the bottom of this page.

10. Citytrip Vienna: Accessibility to the capital of Austria

On a city trip to Vienna? For a city trip of a day or a long weekend in Vienna, the airplane is the preferred means of transport. From several Dutch airports you fly in about 2 hours to the capital of Austria. Vienna's airport, Flughafen Wien-Schwechat, is about 18 kilometres from the city centre. By public transport you can get to the centre within half an hour. In the city you can then move around by metro, tram, leg-wagon, bicycle or of course by horse and cart.

You can also take the train or car to Vienna. The distance from Utrecht to Vienna is more than 1100 kilometres, so you'll be on the road for a while. If you are on holiday in Austria for a couple of weeks, a visit to Vienna is highly recommended.

11. Day, weekend or week on a city trip to Vienna? Our tips

Historical imperial palaces, beautiful baroque-style buildings, enjoy traditional Austrian cuisine, shop till you drop, take a ride on a big Ferris wheel, immerse yourself in the nightlife of Vienna or attend an impressive opera. There is plenty to do in Vienna! Vienna is an excellent destination for a city trip for a day, weekend or full week.

Breathtakingly beautiful countryside in the heart of AustriaSportcamp Woferlgut, located in Bruck, is one of Austria's best campsites. On the grounds, you will not only find the campsite but also a great luxury hotel. You can take advantage of various all-inclusive amenities and the surroundings are breathtakingly beautiful with the mountains and lakes of Hohe Tauern National Park. Sports are centre stageDue to the central location of Sportcamp Woferlgut, you can enjoy a large number of sights, sporting activities and hot springs. There is a swimming lake and a heated pool (charges apply), an extensive wellness adventure centre, amenities for fitness and sport assistance, a low rope course, various sports fields, an indoor playground with children's cinema, relaxation area with library, Kneip creek, a Fun & Action recreation area, and the list goes on. Make use of the all-inclusive hotel facilitiesThe hotel has a restaurant that serves local specialities, house specials and international delicacies, as well as a bar and wine cellar. Furthermore, there are folk dance performances, live music and a professional entertainment team that organises a variety of activities in the Topi Club for the youngest guests, in particular. Relaxation, sports, creative activities and chilling out, you can do it all here. Hohe Tauern National Park is around the cornerThere are plenty of options for day trips, such as to the Hohe Tauern National Park, Zell am See, Salzburg, outdoor activities, golf, castles, and much more besides. Your hosts can tell you all about the possibilities. 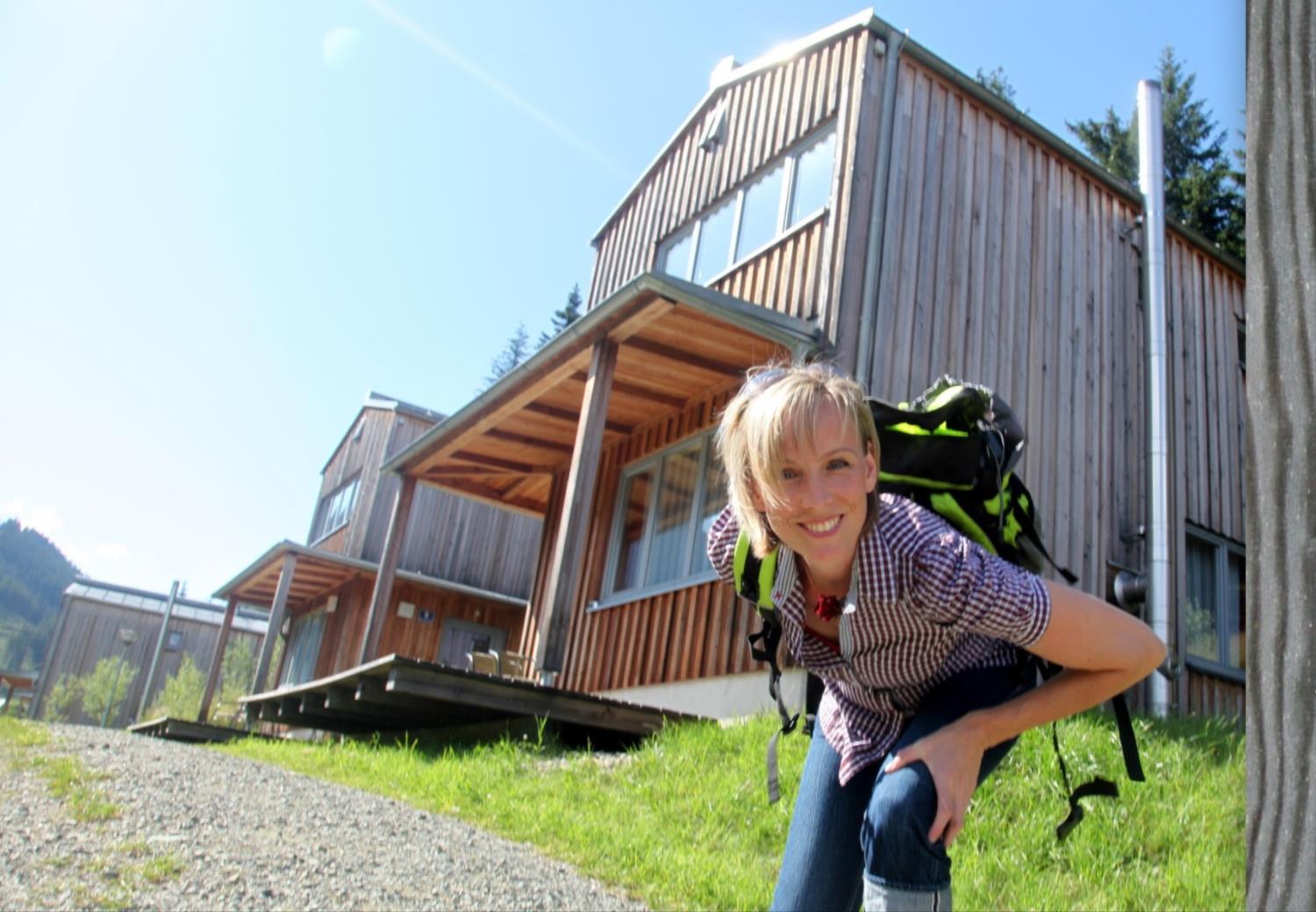 Discover "camping am see", located in Austria. Book now from €0!