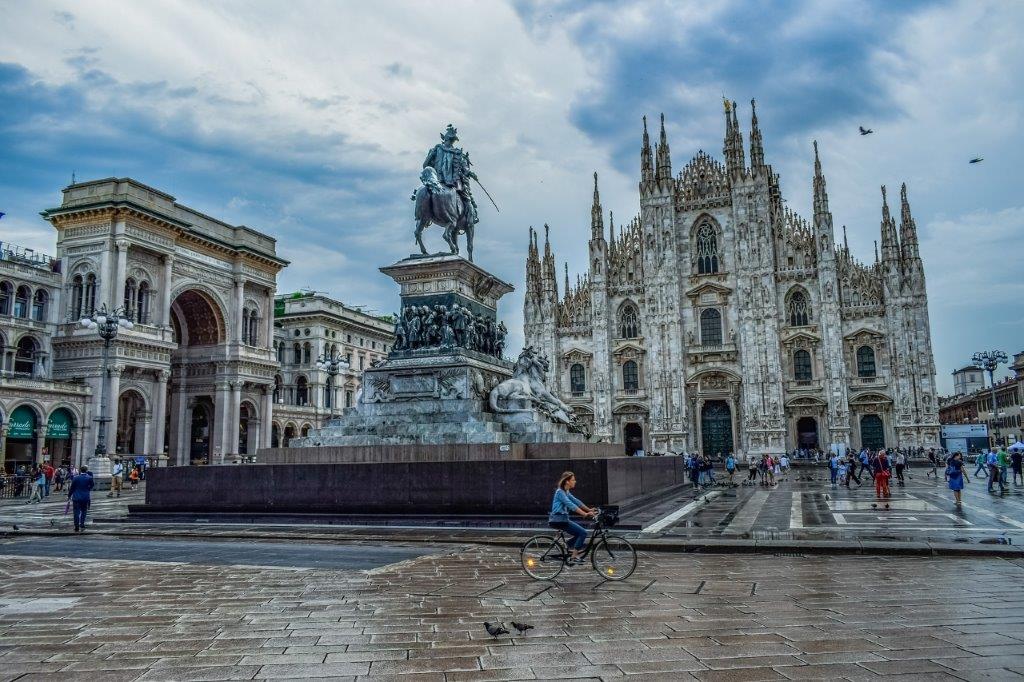 Milan is the largest city in northern Italy and one of the 20 most visited cities in the world. Known as a fashion capital, Milan is a walhalla for anyone who loves shopping. Prada, Gucci, Dolce & Gabbana, all the top designers are represented in Milan.

Besides fashion, Milan is also a city of art and culture. The famous Cathedral of Milan, for example, is one of the largest cathedrals in the world. Next to the Cathedral is the oldest shopping center in the world and Milan is also home to the famous 'Last Supper'. In the city you will find many other historic buildings and museums. Besides the sights, Milan has a nice atmosphere. You can enjoy Italian cuisine, go out in one of the many pubs and clubs or relax on the grass in Parco Sempione.

Do you want to go on a city trip to Milan for a day, weekend or week? The characteristics of this beautiful city in Italy can be found in the table below. What else is there to do in Milan? In this article we have listed the most popular sights of Milan for you.

2. Visit the Cathedral of Milan

The Dom of Milan is one of the largest churches in the world. Only St. Peter's in Vatican City and Seville Cathedral are larger. The Cathedral is 157 metres long, 92 metres wide and 108 metres high. On the outside the church is decorated with marble turrets and statues. The architectural style is Gothic.

The construction of the cathedral took more than 3 centuries. The large bronze doors of the main entrance were only added in the 20th century. These doors depict the history of Milan. In the Museo del Duomo you will discover more about the construction and restoration of the church. 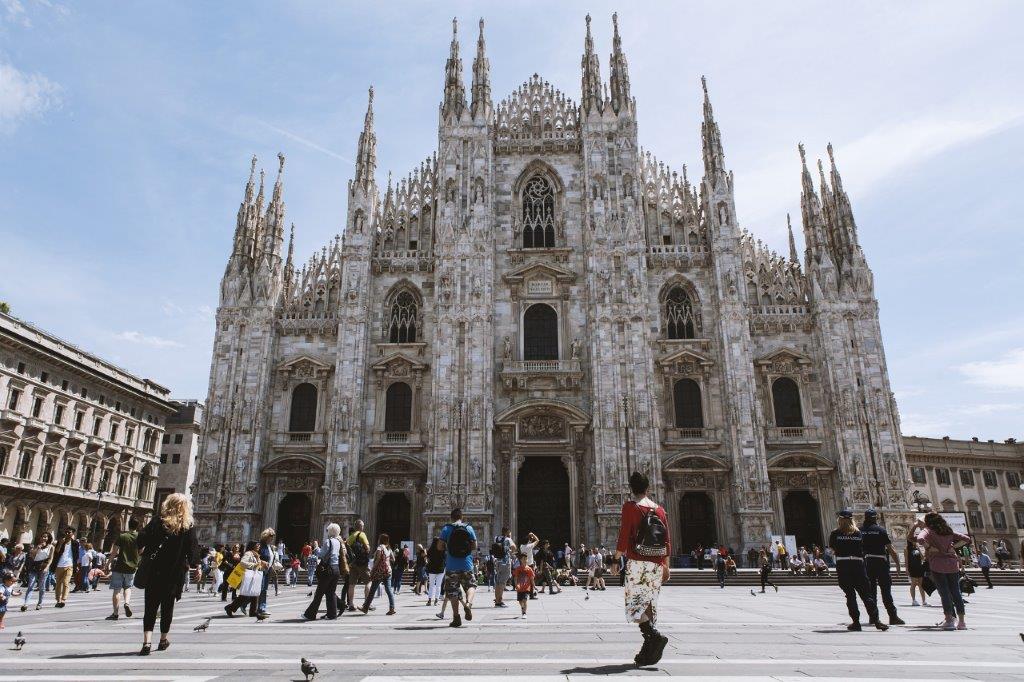 The Cathedral is located on the most famous and central square of Milan: Piazza del Duomo. Numerous other buildings surround the square, such as the Grand Galleria Vittorio Emanuele II and the operage building Scala. In the centre of Piazza del Duomo stands a monument of Victor Emanuel II, the very first king of Italy.

Beyond the cathedral is another famous square: the picturesque Piazza Mercanti with beautiful houses all around. In the Middle Ages this was the commercial and administrative centre of Milan. The square connected Milan with the most important surrounding cities through several roads.

4. Parco Sempione with the Torre Branca and the Acquario Civico

In addition to squares, you will also find parks in Milan. The most famous and largest park is Parco Sempione. This park is located in the center of Milan, behind Castello Sforzesco. Locals and tourists visit Parco Sempione to relax. There is a playground and a lake and there are several sports fields in the park.

Acquario Civico is the third oldest aquarium in the world. Here you can enjoy all kinds of fish and shellfish. In the park you will also find the Torre Branca. This is an iron tower 110 metres high and a popular viewpoint of Milan. In clear weather you can even see the Alps and Apennines. In the evening the Torre Branca is beautifully lit. 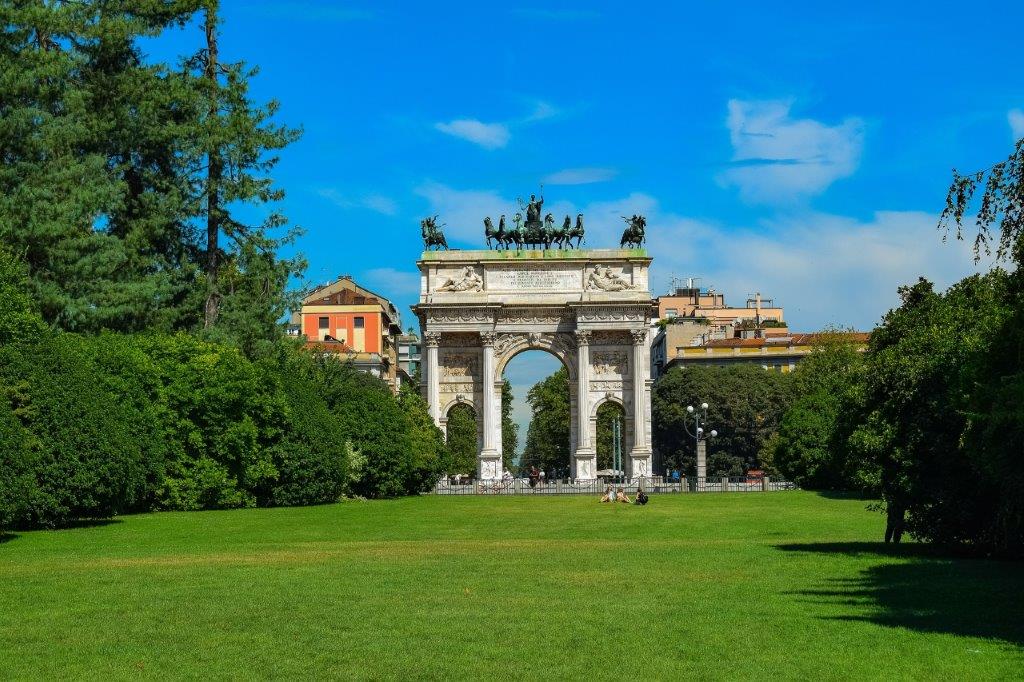 6. One of the most special sights of Milan: La Scala

La Scala is Milan's famous opera house. Even if you don't like opera, this building is well worth a visit. The concert hall has the appearance of a cathedral. You can also visit the adjoining Theatre Museum with a collection of musical instruments, posters and costumes.

During the opening of the theatre season on December 7, the whole city of Milan is set for the opera. If you want to attend a performance, you have to be there quickly. Ticket sales start about 2 months before the performance. Often everything is sold out within a day.

7. Discover the history of Castello Sforzesco

In the centre of Milan lies Castello Sforzesco. In the 14th century it was built as a fortress. The name refers to Duke Francesco Sforza who, in the 15th century, extended the existing fort with living quarters and a place for troops. The castle was built in the military renaissance style and can be recognized by the highest tower: Torre Filarete.

You can walk around the castle and the surrounding park and visit the castle museum. In the Museo del Castello you'll find paintings by Michelangelo, Bellotto and da Messina. You can also admire ceramics, antique furniture, weapons and musical instruments 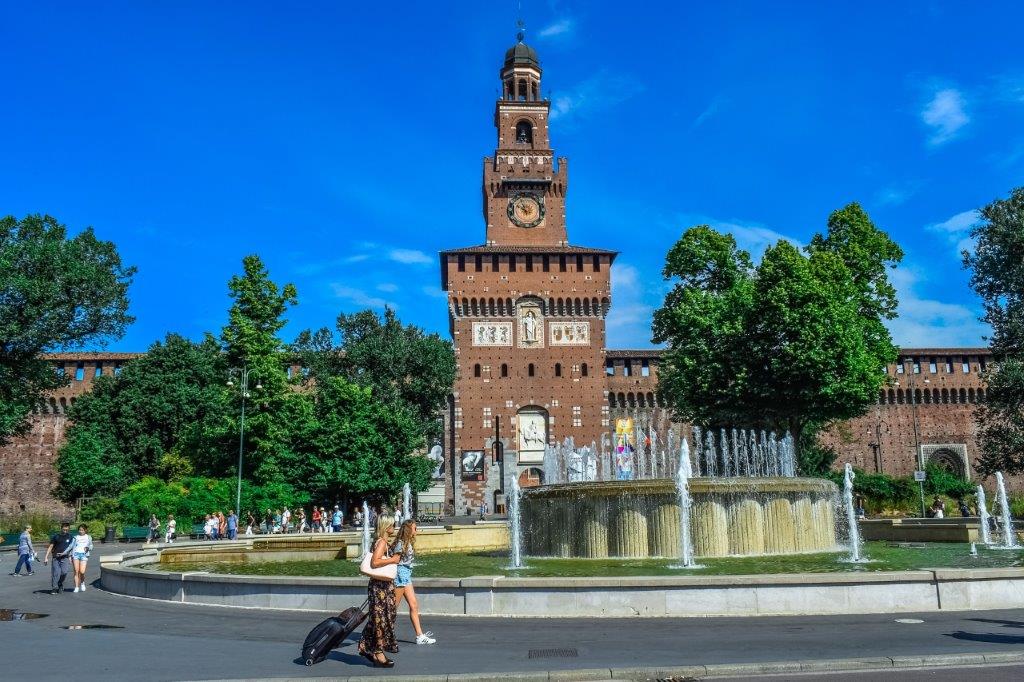 8. Some popular museums of Milan

The museum Pinacoteca di Brera is situated in a beautiful baroque palace in the artists' district of Brera. In this museum you will find, among other things, works by Italian artists. Masterpieces include the Sposalizio della Vergine by Rafael, Cristo Morto by Mantega and Avond meal at Emmaus by Caravaggio. There are also paintings by foreign artists such as Rubens, Rembrandt and El Greco. 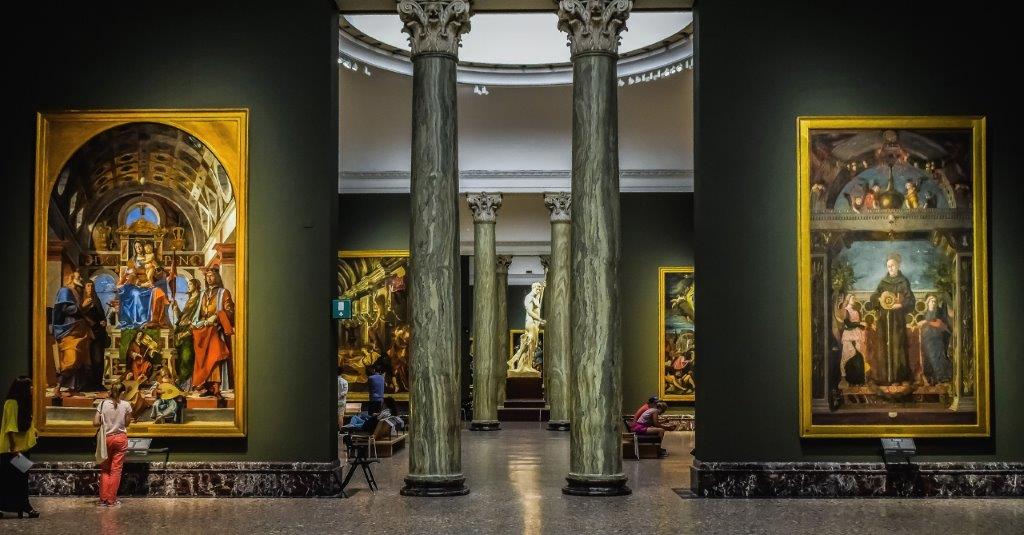 Museo della Scienza e della Tecnologia "Leonardo da Vinci". This science museum focuses on the development of science since the 15th century. It is housed in the old monastery of San Vittore. In the museum you can see frescoes by Bernardino Luini, models of machines and inventions by Leonardo da Vinci, a collection of old cars, steam locomotives and airplanes and objects from physics, astronomy, optics, shipping, radio communications and telecommunications.

In an old monastery from the 8th century there is the Milan Archaeological Museum. Here you can see Greek, Etruscan, Roman, Barbarian, Gandhara and Medieval works of art. A masterpiece is the Parabiago plate. This is a round silver plate from Roman times with mythological figures.

One of the most popular sights in Milan is the monastery of Santa Maria delle Grazie. Here you will find Leonardo Da Vinci's famous work of art on the wall: The Last Supper. To view the painting you have to sign up a few days before you go on a city trip. You then have fifteen minutes 'viewing time'. The monastery is on the UNESCO World Heritage List.

Another beautiful building in Milan is the Basilica di San Lorenzo Maggiore. This is one of the oldest Roman Catholic churches in the world. The original building dates from the 4th century A.D. and has been restored several times due to collapses and fires. This has created a special mix of architectural styles and materials. 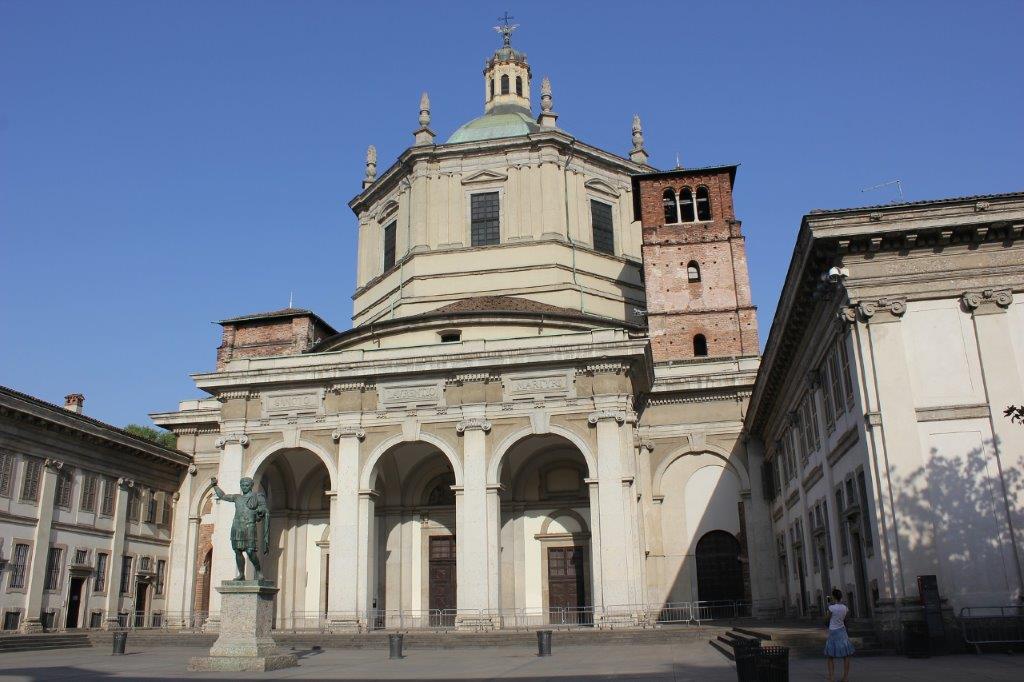 Centro Storico is the most famous district of Milan. It is the old historic centre with Piazza del Duomo as its central point. It is always lively here, both day and night. The district is full of restaurants, cafes, shops and historic buildings.

Sant'Ambrogio is a working-class district in Milan with numerous shops, restaurants and cafes. Well-known attractions of the district are the morning market and the flea market (Mercato delle Pulci) on the Largo Pietro Annigoni. During the day you can do excellent shopping in the district and in the evening it is a nice nightlife center. One of the famous sights in this district of Milan is the Basilica of Saint Ambrose.

A well-known place when it comes to graffiti and street art is the Isola district of Milan. Originally Isola was a neighbourhood for poor families. The name refers to the fact that Isola used to be separated from the rest of the city by railway lines. The streetart is mostly by local artists.

Isola is also known for its numerous restaurants, vibrant nightlife and many high rise offices and apartment buildings. On the outskirts of the district is the famous 'Bosco Verticale'. This is an apartment building with more than two thousand trees and shrubs and has won several awards. Definitely worth a look. 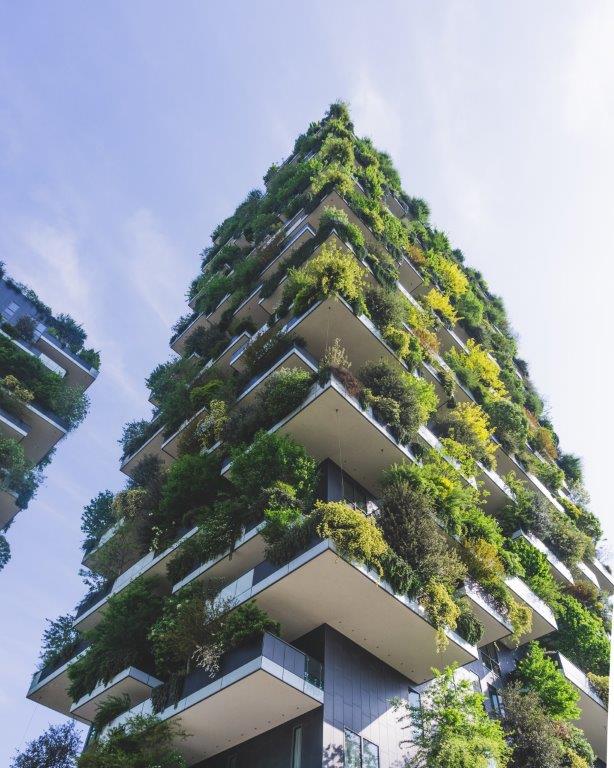 11. San Siro Stadium: a must for football lovers

The home base of AC Milan and Inter Milan is the San Siro Stadium. Construction started in 1926 and over time the stadium has been further expanded. If you are a football fan, then it is worthwhile to watch a football match during a city trip to Milan.

You can also book a tour of the football stadium. You will then visit the changing rooms and VIP area and walk through the player tunnel onto the pitch. The museum is the finale. Here you will find life-sized dolls of large football players who have played in the stadium. Like Rijkaard, Gullit and Van Basten. 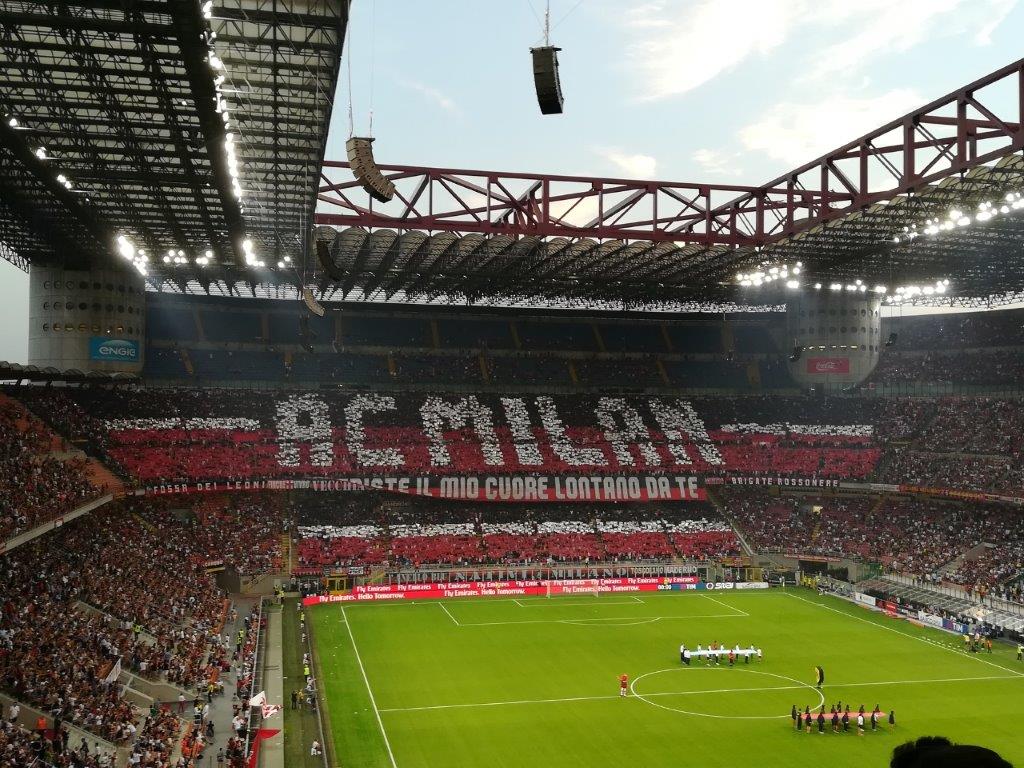 QC Termemilano. This spa is located in a former tram depot. On the ground floor you will find a tramsauna and garden pools between the Roman ruins. Under the ground floor are several stone rooms with saunas and baths. The atmosphere is definitely special and relaxing. Of course you can also book all kinds of treatments and massages.

Milan is the city of fashion, so as a shopaholic you've come to the right place. Many large department stores are located in Milan, for example Prada, Armani, Versace, Gucci and Dolce & Gabbana. Most exclusive shops can be found in the street Quadrilatero d'Oro (Golden quadrangle).

In addition, there are plenty of cheaper stores. There are regular markets where you can buy nice and affordable clothing. The real fashion lovers can attend one of the Milanese fashion shows. The famous international Milan Fashion Week takes place between mid January and the end of February.

In Milan you can eat delicious food at any time of the day. The Italian kitchen guarantees delicious dishes. Meat, Italian pizzas, cheese boards, bruschetta's and much more. Don't forget to enjoy the local Italian wines and ice cream.

Milan has a vibrant nightlife. You can have a drink in one of the many cafes or on a cosy terrace. In addition, there are more than enough clubs and pubs where you can dance until dawn.

14. Overnight stay in a hotel in Milan

If you go on a city trip to Milan, you can stay overnight in a hotel. You can choose a cheap hotel in Milan as well as a luxury hotel with several stars. For an overnight stay you will usually lose between 50 and 120 euros. A hostel is a lot cheaper, especially if you choose to share a room. For about 2 tens you already have a bed.

Grand Hotel Et De Milan opened its doors in 1863. The famous composer Verdi stayed here for about 27 years. A special piece of history. By the way, you don't have to sleep in a hotel if you go on a city trip to Milan. You can also camp in the area or choose a nice bed & breakfast.

15. How to reach the fashion capital of Italy?

On a city trip to Milan? For a city trip of a day or long weekend in Milan, the airplane is the preferred means of transport. From several Dutch airports you fly in about 1.5 an hour to the fashion capital of Italy. Milan has three major airports:

You can also take the train or car to Milan. During a holiday to one of the Italian lakes a day or weekend in Milan is highly recommended. From the Netherlands it is a nice drive. The distance from Utrecht to Milan is about 1050 kilometers. By train or car from the Netherlands you are about 12 to 16 hours away. Once in Milan you can travel by bus, tram, train, bike, metro, taxi or on foot.

Below are some tips if you are going on a city trip to Milan:

Enjoy Italian cuisine and hospitality, shop in the fashion capital of Europe, visit the various historical sites, enjoy the nightlife of Milan and relax in the famous Parco Sempione or a luxurious Milanese spa. Milan is a perfect destination for a city break for a day, a long weekend or a full week!